MAP08: Ancient Aliens is the eighth map of Ancient Aliens. It was designed by Paul DeBruyne (skillsaw) and uses the music track "Hell Jungle," composed by Stuart Rynn (stewboy). The par time is 10:00. 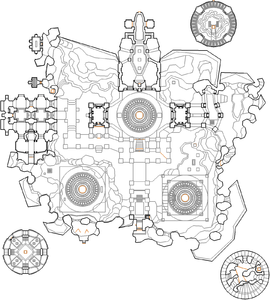 Map of Ancient Aliens
Letters in italics refer to marked spots on the map. Sector, thing, and linedef numbers in boldface are secrets which count toward the end-of-level tally.

Start by grabbing the shotgun, super shotgun, and security armor in front of you. Drop down and deal with the group of imps, as well as the other monsters that will show in the area. To the east you'll find a berserk and a box of shells. Follow the path to the west and you'll find a chaingun tucked away in an alcove, and eventually a temple. Enter and grab the rocket launcher in front of you. Press the switch and deal with an archvile behind and two revenants ahead. Get on the lift afterwards and head north. Press the switch on the pillar to reveal another archvile amongst other monsters. The doors on the other side have opened, so enter those and fight another revenant as well as a shotgunner and two imps. Take the lift on the other side of the room and jump down from the ledge to the first big arena.

The only thing here to find is a UFO, so walk under it to enter. Inside, you'll be surrounded by four mancubi as well as some imps and spectres. Press the switch on the northwestern wall and reenter the teleporter to head back to the arena. Now it is full of mancubi, revenants, and a couple of arachnotrons. Deal with them, then press the switch in the cave that opened to the south to get to the yellow key. Drop back down and get up on the bridge to drop the yellow bars. Press the switch in here to raise a bridge across the water to the central UFO.

Your main goal is getting into the UFO at the top, but there are a couple of things to grab beforehand. A cave to the southwest has a lift that will lead to a combat armor, while another cave to the northeast will take you to an overlook with the plasma gun. After exploring, head to the top of the pyramid and enter the UFO. Entering the lit section in the middle will teleport in some archviles and spectres. Deal with them and grab the blue key if you haven't already, then head back out of the UFO.

Jump down and head to the north to drop the bars using the blue key. Fight the demons, revenants, and a pain elemental before entering the last UFO. Head to the north end and press the switch to reveal an ambush with Hell knights blocking your path and two archviles back at the teleporter. Kill everything, then exit the UFO and head up the stairs in the cave to the north to press another switch. This will raise some pillars to let you access the red key.

With the key in hand, head out of the arena and towards the northwestern corner, past the initial temple. The red switch is in here, and pressing it will lower the floor with one final ambush with revenants, Hell knights, and two barons of Hell. The exit door (as well as a teleporter back to the main level) is back to the south.

* The vertex count without the effect of node building is 9108.