MAP08: Ballistics is the eighth map of Hell Revealed II. It was designed by Sam Woodman and uses the music track "Lost Soul," by Petter Mårtensen (Thyrbse). 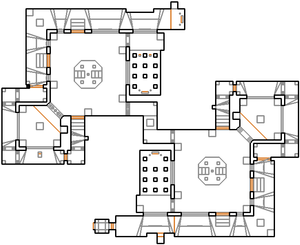 Map of Ballistics
Letters in italics refer to marked spots on the map. Sector, thing, and linedef numbers in boldface are secrets which count toward the end-of-level tally.

You will have to face off with several imps as well as revenants through the windows. Grab the plasma guns on the pedestal and get to it. When you are done, enter either the western or the northern door, then head eastward to find a mancubus guarding a switch. Some Hell knights and a baron of Hell will teleport in when you approach the switch, which lowers the red skull key on the pedestal outside. Grab the red key and take either red door to reach the hall that is behind the yellow skull key. Flip the switch in this hall to lower the red barriers, then go back outside and retrieve the key, killing arachnotrons, revenants, and an arch-vile as you get it. Now head for the northeast corner of the outside area, and open either yellow bar to find another switch. Flipping it allows you to cross to the second half of the map. Grab the BFG9000, ammo, and megasphere as you cross, and get rid of the enemy masses that you can. When finished, head for the southwest corner, and between the Hell knights and barons of Hell, you will find a soul sphere and a switch. Flipping it reveals the blue skull key on the pedestal, so pick it up. Advance to the southern hallway, and go west, looking out for the cyberdemon who teleports in, then exit the level.

* The vertex count without the effect of node building is 1197.