MAP08: Basement Jazz is the eighth map of Whispers of Satan. It was designed by Kristian Aro, and uses the music track "Europian Solo" by Paul Corfiatis. 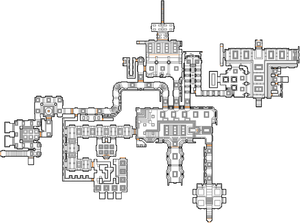 Map of Basement Jazz
Letters in italics refer to marked spots on the map. Sector, thing, and linedef numbers in boldface are secrets which count toward the end-of-level tally.

Head into the big room and take note of the blue key in the northwest corner as well as the switch just to the right of on the starting platform. Head down the stairs and go around the platform you were on to the door to the southeast. Go through it and all the way down the hallway to the switch and flip it. Watch out for the baron of Hell and other monsters that appear once you flip the switch though. Go back to the starting platform to find the previously-barred switch is now accessible. Flip this switch to open the doors that are nearest to the blue key. Take the door heading westward. While you are going down this large hallway, make note of the area that is blocked off by skull bars. Open the door at the end of the large hallway to appear in a crate room. Head south, until this room opens up a bit, then head east and north until you find a switch. Flip it, and look out for the Hell knights that appear behind you. Go back to the large hallway to the area where the skull bars are; this area is now open. Enter it and flip the switch inside, then go back to the hub. The blue keycard is now lowered so you can pick it up.

After grabbing the key, head through the open door just east of where it was and head down this hallway until you find a blue door on your right. Enter this door and take the door on the left side. Follow the hall behind it to find a revenant and a switch with yellow bars surrounding it. Flip it and return to the hall where you found the blue door and continue westward. Watch out for the army of monsters that emerge as you approach the blue door, however. Enter the blue door to see the yellow keycard guarded by chaingunners in a cage. If you have not flipped the switch earlier, its pillar would still be raised. Follow the path here all the way to a switch. Hit this switch and go back down the path a bit to see a large opening in the path. There are a lot of monsters stationed here and a rocket launcher around dead corpses in the middle. East of the launcher is a door, so go through it and the next door to obtain the yellow keycard. Look out for monsters as you head back.

Return to the hub and take the yellow door on ground floor. Follow the hall here to a large room. In this large room, go to the stairs in the northeast, and follow this ledge to the door. Open it and go through the rooms to a switch. The red keycard is in the same room as this switch, but you cannot get it yet. Press the switch and leave the rooms to find some revenants and a mancubus. From where the revenants came from, there is a switch with red bars around it. Press it to lower the keycard, and then go back in the rooms to retrieve it. Make your way back to the hub at the beginning and take the red door in the middle. Enter the cargo room and examine the lift with crates on it to find a switch tucked behind some crates. Flip it to raise the lift and open the door at the top to exit.

Go through the hallway behind the yellow door, and just before the hall leads all the way east into the large room, you can open the brown wall for a backpack, a stimpack, and a cell charge.

When you enter the large room in the far east, stay on the metal-floored section and head west into a blue-floored section. Behind the computers, you could get an armor.

* The vertex count without the effect of node building is 9044.