MAP08: Battery is the eighth map of Community Chest. It was designed by Daniel Trim (Bad Bob), and originated as MAP02 of his 2002 WAD, Redux.wad. 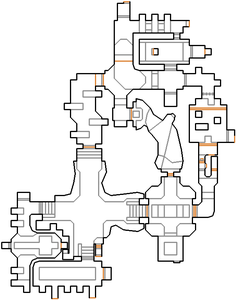 Map of Battery
Letters in italics refer to marked spots on the map. Sector numbers in boldface are secrets which count toward the end-of-level tally.

Walk forward and open the door. Go through the next door, run all the way north, and hit the switch at the east end. Go through the southern door, and hit the western switch. Grab the yellow key at the east, go through the southern doorway, and return to the north of the map. Pull the northern switch, and go back to the beginning of the level. Open the yellow door to the west, open the small door to the south, and trigger the switch. Go through the wide door next to it, and press the southwest switch. Use the southeast switch if you do not leave the room before the door closes. Enter the western doorway, step onto the blue, matted floor, and grab the blue key at the east. Leave this room, open the blue door at the north, and go on until you approach a dead end. Advance toward the eastern wall, and it will open. Run under it, and another wall will open to the east as well. Go all the way east, and approach the blue door at the south. As you do this, the lights will turn off, and both ends of the room will be blocked off. Go into the eastern compartment that has opened, and flip the switch to raise the barrier in front of the door. Open the door, and flip the switch inside.