MAP08: Beast Island is the eighth map of the megawad Alien Vendetta. Most of the level was designed by Jan Endre Jansen, with the final island fortress area designed by Anders Johnsen. It uses the music track "Huline Temple" from Lands of Lore: Guardians of Destiny.

Jansen's portion of this map was originally intended for a project of his own, and was designed in 1998. The castle area in the original map was replaced by the island fortress, which was originally a standalone map designed by Johnsen in 1996. 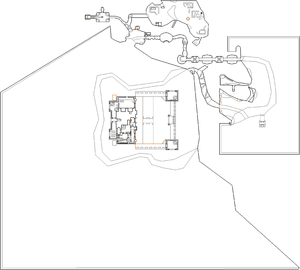 Map of Beast Island
Letters in italics refer to marked spots on the map. Sector, thing, and linedef numbers in boldface are secrets which count toward the end-of-level tally.

Right from the start some demons will ambush you. If you do not possess any weapons, immediately run out from your encampment and head behind it to a small enclosure containing a shotgun, a super shotgun, and some boxes of shells. Proceed through the field, taking any supplies from the other encampments if necessary. Then, head through the vines into the cavern. You will find one path is blocked off, so turn to the other path. In this room should be some cacodemons and a Hell knight. The switch at the end here opens the blocked-off path, which in turn leads to a small outside area. You should see a revenant in the cavern, there are some steps that will help you continue through the water. Climb up and follow the path east. As you do, look out for several traps, some of which may occur behind you and to your sides.

Jump out of the water onto solid ground outside and follow the path. You can get the plasma gun outlined in "Other Points of Interest" in this area if you like. Also here is a blocked-off portal. You will need to find the switch to remove the barriers, but it is close enough to the portal. It is in the open space right where a number of revenants are. If you want to save ammo, do not kill them. Instead, hit the switch and go through the portal. You will teleport onto several different platforms with each step, telefragging the revenants had you not killed them previously. Eventually you will teleport into a river in the cavern. Follow this river and you should end up right next to the big castle you previously saw in the distance.

The main gate to this castle is locked. To open it, head all the way around to the west side of the castle, and drop into the small moat. The switch there lowers the bars to the main gate of the castle. The teleporter takes you to Secret #4. Now go into the castle through those bars (alternatively, you can sidle along the narrow wall next to Secret #4 if you choose, ending up on the southern wall of the castle from where you can drop down). When you enter the castle, a cyberdemon will spawn on the bridge so be ready for it. Cross the bridge and head to the door on your left. In this next room, head towards the south using the switch to lower the lift up to the next area. In this hallway filled with chaingunners drop to the next floor and climb the stairs immediately in front of you. You are going to jump across the moat here (the same moat with the switch that opened the fortress) to the adjacent hall. Grab the BFG9000 here before dropping into the next room, where you will go up the stairs to press the next switch. Leave the room via the marble face on the east to return outside. The central door will be open, revealing an arch-vile and the exit.

Roughly halfway along the cliff which spans the eastern "ocean shore", you will come across a narrow passage to a small ravine. Eliminate the group of sergeants and ascend the stone stairs to the perch where they were. From there, traverse a narrow ledge along the ravine wall onto nearby perch to claim a plasma rifle and a bulk cell.

* The vertex count without the effect of node building is 2192.