MAP08: Bloody Detour is the eighth map of Project Einherjar, and the first map of the second episode, Deep Into White Hell. It was designed by Mike MacDee (Impie) and uses the music track "". 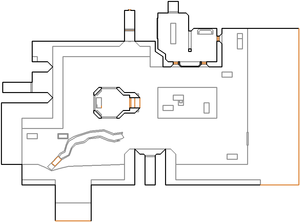 Map of Bloody Detour
Letters in italics refer to marked spots on the map. Sector, thing, and linedef numbers in boldface are secrets which count toward the end-of-level tally.

This is a small, mostly outdoor map. Once you jump off the wreckage, grab the nearby guns (including the Shit Creek scattergun hiding in the wreckage) and make a quick combat sweep of the area. The opposition is mostly Fenris attack dogs, weak Shieldmaidens, and the first new enemy of Episode 2, the scattergun-toting Block Doc. Once the main courtyard is clear, enter the building furthest from the crash site to disrupt a meeting of Shieldmaidens and take their armor and blue key. Grabbing the key opens a Juggernaut/Mommybot ambush behind you, and opens the doors to the other buildings outside: Block Docs and dogs will pour out in pursuit of you. Make use of the spring mines to take them out.

Scale the central tower and use the blue key to enter. A Block Lord guards the red key: lure him outside to avoid close-quarters combat, since he can pulverize you very quickly. Open the red door, kill another Block Lord, and exit.