MAP08: Canyon Complex is the eighth map of 2048 Unleashed. It was designed by The_Trigger and uses the music track "Gun Fighter" by Paul Corfiatis. 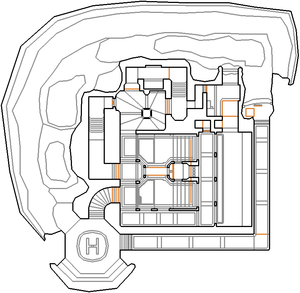 Map of Canyon Complex
Letters in italics refer to marked spots on the map. Sector, thing, and linedef numbers in boldface are secrets which count toward the end-of-level tally.

Take the armor then go round the metal column in front of you to find a door. Go through it and climb up the stairs, then turn left and kill three shotgun guys that are revealed on your left before following the passage to a super shotgun. A wall will open ahead of you - go through it and kill some approaching imps, then follow the walkway south and east past some zombies until you can walk through a lit doorway and drop into a pool of water with some demons. Head north to a lift and ride it up then go forward to collect a chaingun and reach an outdoor area with more demons, as well as imps and cacodemons on a raised ledge. Turn left and follow the path until you reach a helipad guarded by a mancubus - the red keycard is on a pillar on the helipad.

Head east into a passage with several chaingunners and follow it round a corner - you will see a wall lower ahead to reveal a switch behind a megaarmor. Press the switch and step on the teleporter next to it to return to the helipad, where the pillar holding the red key has lowered and an arch-vile has teleported in (or two on Ultra-Violence and Nightmare skill levels). Go through the doorway north of the helipad and follow the stairs down to a red key door which will return you to the walkway south of the starting area, then go round to its east side where two metal walls have lowered. Go down the brown steps to find a rocket launcher and use it to kill the revenants that are revealed ahead, press the switch in the south-west corner then go back up the steps to find that a set of bars between the staircases have opened letting you reach the blue keycard.

Picking up the blue key will raise a bridge in front of you - cross it and kill the chaingunners that teleport in then open the blue key door due west of the bridge, follow the passage past some imps and climb a staircase to find the exit switch at the top.

* The vertex count without the effect of node building is 1139.