MAP08: Central Security Grid is the eighth map of Simplicity. It was designed by Melissa McGee (Agent Spork) and uses a MIDI rendition of the Stage 3 theme from Journey to Silius, originally composed by Naoki Kodaka, as its music track. The par time defined in MAPINFO is 6:00. 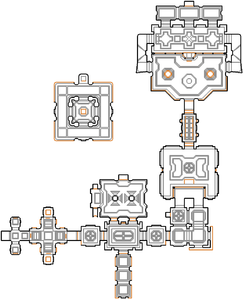 Map of Central Security Grid
Letters in italics refer to marked spots on the map. Sector, thing, and linedef numbers in boldface are secrets which count toward the end-of-level tally.

Use the super shotgun placed at your feet to kill two approaching Hell knights, then open the split door behind them to reach a hub with two imps and a chaingunner. Flip the switch between the green forcefields to open the east and west split doors, which will release a total of 18 demons, then go through the east door and flip another switch behind it to open the next door. Follow the corridor past some imps, shotgun guys and chaingunners to reach a blue teleporter, which will send you to the neighboring room where two knights will spawn. Use the plasma gun in the center of the room to kill them, then open the split door at the north end and push past some imps to reach another door. When you try to open this door the lights will go out and you will be ambushed by two nightmare demons (three on Ultra-Violence (UV) and Nightmare (NM) skill levels) that behave like spectres but move faster and can fire green projectiles at you.

Kill the nightmare demons to open the doors and reach a room with a megaarmor, but approach it with caution as two arachnotrons are waiting to ambush you along with two demons and two revenants that teleport in. Flip the switch due north of the megaarmor to open the east and west doors revealing two more nightmare demons (four on UV and NM), then Go through either door and follow the passages to find a pair of knights guarding the yellow keycard, which has been placed by the windows - taking the key will open some more split doors to the north, revealing three revenants and two imps. Enter the blue teleporter behind the imps to return to the previous pad, then go back to the hub and pass through the west doorway to find another switch (requiring the yellow key) that will open the door next to it. Go through and kill two knights guarding a pair of blue teleporters - which will not function yet - then continue on to a T-junction and kill the chaingunners waiting on either side, then flip both switches to activate the teleporters you just passed.

Kill two nightmare demons that are released then go back to the teleporters and enter the south one to enter a small chamber - ready yourself before stepping off the pad, as the doors around you will open to reveal four revenants and four demons surrounding you. Kill the enemies then flip the switch in the north alcove to lower the red keycard, pick it up then step on the teleporter again to return to the previous hallway. Enter the north teleporter you passed earlier and kill a waiting chaingunner, then press the red bars behind it to lower them and reach a button that will disable the forcefields in the hub. Enter the teleporter again and return to the hub, ready to kill two arch-viles that have appeared in the exit room, then enter the blue teleporter at the north end of the room to end the level.

* The vertex count without the effect of node building is 2849.