MAP08: Cold Reception is the eight map of Community Chest 4. It was designed by Mithran Denizen and uses "Quad Machine," a music track from Quake II by Sonic Mayhem. 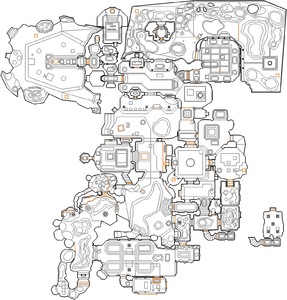 Map of Cold Reception
Letters in italics refer to marked spots on the map. Sector, thing, and linedef numbers in boldface are secrets which count toward the end-of-level tally.

Cold Reception is heavy on the cannon fodder and a little short on the ammo and health. Fortunately, you do get a berserk pack relatively early in the map, so you can use it to smash your way through most of the lighter enemies (and with some skill, even the larger ones). While a plain route to the exit is simple, the map has many areas to explore and a high level of connectivity. Both the red keycard and blue keycard are required to exit the map. 100% kills does require accessing most of the secret areas.

You begin on a ledge overlooking a large snowy area. On your left is a black building; on the right is a green building with brown trims. Grab the shotgun ahead. On lower skill levels, you'll have some extra ammunition nearby to help: A box of shells on Hey, not too rough and below, or 4 shotgun shells on Hurt me plenty. Kill the shotgun guy and grab his shotgun for more ammo. Next, turn to the left to find two imps and a zombieman at the far side of the ledge. Kill them by detonating the nearby barrels at the right time.

At this point, you've probably woken up a large number of monsters from the area in the north of the starting point (up to five zombiemen, an imp and a shotgun guy), so you may want to get off that ledge into the snowy area. An imp (Hurt me plenty and above) and a zombieman (Ultra-Violence and above) will take potshots from the ledge protruding from the black building. Two imps and up to two zombiemen will also approach from the narrow snow area between the two buildings. Scavenge for shotgun ammo here, but be careful of the monsters heading onto the starting ledge. If you head towards the crates in the southwest, watch for an imp waiting in ambush there.

Once ready, head south into the narrow snow area. As you approach it, you will see a small brown crate. Equip your shotgun, face left and walk past it. A shotgun guy will be in ambush behind the crate. Continue further south into a large snow area with a frozen waterfall at the far end. This area has a fair amount of ammo, but also a fair amount of zombiemen, imps and one demon in the middle. The biggest threats to your health, though, come from the east and northwest. In the east, a mancubus (three imps on Hey, not too rough and below) awaits in the entrance to the black building. In the northwest, there are two imps and a shotgun guy (not on Hey, not too rough and below) on elevated perches. Take the monsters out, then head east into the entrance where the mancubus was.

From the entrance to the black building, head through the doorway in the north. This next room has up to three imps and four zombiemen (the last one is in ambush in the northeast corner). Head through the doorway in the northwest of this room to a square outdoor area with a megasphere on a platform. Deal with up to two zombiemen and two imps here, and grab the berserk pack in the northeast. Return to the previous room in the south, then go down the steps in the southeast. This room has three imps (two on Hey, not too rough and below). From here, head west into a small rocky room. There are up to two zombiemen and two imps here (on Hurt me plenty and above, one zombieman is behind the pillar). From this room, head south.

You are now in a large room with a tiled floor. As you enter, kill the imp in front, and up to two imps on a platform to the left. The main part of the room contains up to three zombiemen and five imps. You may wish to clear the pit in the south with demons to get your hands on a chaingun. Find the passageway in the southwest of the room and head through it. Kill the shotgun guy in it and follow it around into the red key chamber. This room has up to three shotgun guys and two imps. On Ultra-Violence and above, one is waiting in ambush at the corner right after the passageway. Clear them out and grab the red key.

As you return to the large room, you will find that a trap has opened in the southwest, with up to three imps. Monsters will also begin teleporting in from the northwest:

Return to the outdoor area with the megasphere on a platform. Head through the door in the east of this area to enter a room with grates on the floor. This room has up to three shotgun guys and an imp. A shotgun guy and a cacodemon in an adjacent room with a nukage pit will also be alerted through a window in the northeast. Take out the enemies in this room and grab the blue key in the southwest corner. While you could go through the passageway in the northeast to deal with the shotgun guy and cacodemon in the adjacent room directly, entering that next adjacent room triggers a trap in that room with up to four imps and two demons.

Backtrack to the outdoor area with the megasphere. Open the red door in the north, and kill the two shotgun guys and imp ahead. Step onto the brown-tiled area, then head back to the outdoor area with the megasphere. Up to five cacodemons will teleport onto the megasphere platform - deal with them now. Once they are all down, head back north through the red door. As you continue north, you will pass a set of four grey crates. Once you walk past it, a panel to the right opens, with up to four demons. You will have to deal with them at the same time as you handle up to three imps and a demon ahead, as well as three Hell knights from a trap further up. Separate out the groups of monsters and take them down.

On the floor is a spot marked with yellow and black stripes. To the northeast is a passageway leading to a blue door. Beyond this blue door is a garden-like area. Most of the enemies in here are cannon fodder and will fall to well-placed chaingun fire (or by using the barrels in the room). However, on Ultra-Violence and above, there is a mancubus directly opposite the blue door. You will probably have to take it out personally.

Head through the garden area, then kill the imp and demon at the end. You will emerge into an outdoor area. The courtyard only has two imps and a zombieman, but the real problem is up to four cacodemons that will appear from behind the walls. Make a beeline for the exit door, then flip the switch inside. the elevator you are on will descend, and shortly after, the map will end.

From player 1's starting point, turn around and open the silver door. This reveals a small chamber with a stimpack. (On co-op, player 4 spawns here.)

If you had flipped the switches in Secrets #5, #11, and #13, you will be able to access the yellow door past the corridor in Secret #14. Before the yellow door, and only if you are playing on Ultra-Violence or higher, if you wait five minutes after the level starts, a door will open to the north revealing a teleporter. If you get in it before it closes, you will enter a tribute room with dead monsters and a shotgun, as well as the words "STEVE COHEN 1957-2011" written on the floor. This area does not count towards the secret total.

* The vertex count without the effect of node building is 9694.

In the exit elevator, when the switch is flipped, the map does not end immediately. Instead, the door closes and the elevator begins to lower for a short while before the level ends.

In this map, this is accomplished with a series of voodoo dolls in six control carrying sectors, all controlled by a pair of linedefs with special 253. The voodoo dolls are unable to move as they are stuck in or behind doors in these control sectors. Five of them are the same length, with a trigger line 64 units away from the voodoo doll's starting position. Each of these controls the descent of each of the five sectors comprising the elevator, so as to ensure that the elevator's geometry remains constant as it descends. The sixth is longer, and contains two trigger lines just ahead of the voodoo doll which seal the entrance to the exit elevator, as well as a "walkover exit" line 320 units away from the voodoo doll.

When the switch in the exit elevator is pressed, all it does is to open the doors in the control sectors. Since all the voodoo dolls are released at the same time and move at the same speed, this sequence of events happens: