MAP08: Corridors of Hell is the eighth map of Doomworld Mega Project 2014. It was designed by Fellowzdoomer. 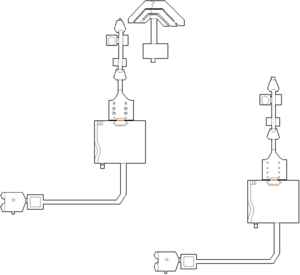 Map of Corridors of Hell
Letters in italics refer to marked spots on the map. Sector, thing, and linedef numbers in boldface are secrets which count toward the end-of-level tally.

* The vertex count without the effect of node building is 470.

The map in DMP2014 is actually an incomplete version which was erroneously submitted by Fellowzdoomer. Though he did have a finished version, it never got uploaded.