MAP08: Demonic Caprice is the eighth map of Doom 2 Unleashed. It was designed by jerrysheppy and uses the music track "AimShootKill" by Tom Mustaine.

When using the music WAD included with this megawad, this level instead uses the music track "Punky Laddie" by Paul Corfiatis. 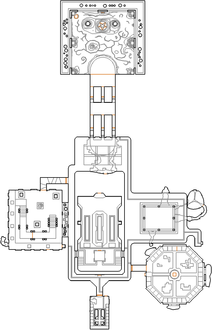 Map of Demonic Caprice
Letters in italics refer to marked spots on the map. Sector, thing, and linedef numbers in boldface are secrets which count toward the end-of-level tally.

Collect the armor if needed then go round the corner and kill the shotgun guys and chaingunner blocking the path, then continue to a large room containing a blood pool with a super shotgun. Leave the room through the south-west exit and follow the hallway round until you reach a switch with yellow key markings, kill the zombies waiting here then go south through a silver door. Kill the imps that ambush you from either side then take the armor and climb the stairs to find more imps guarding a rocket launcher. Head north across an invisible bridge lined with candles to collect the blue keycard.

Go back through the silver door and turn left, then follow the hallway round past a fenced area until you reach a door with blue key markings. Open it and kill the waiting demons, then go through to a square room with eight spectres. Climb up the stairs by the east wall and follow the walkway until you see revenants and one or two arch-viles teleporting in. Use the large pillars as cover from their attacks, and once they have been killed climb the stairs again and follow the walkway until you reach a ledge by the west wall. Follow this ledge south and east to reach the red keycard.

Leave the room and follow the hallway south and east past the switch requiring the yellow key - as you go round the next corner you will see another door requiring the blue key. Go through it and kill two waiting chaingunners then head forward to an octagonal room with a staircase running round it. Dispatch the imps and shotgun guys at ground level then climb the staircase to the top, killing any Hell knights that teleport in to block your way. At the top of the stairs, flip the switch to raise a bridge leading to the central pillar where a baron of Hell guards the yellow keycard.

Backtrack to the switch requiring the yellow key and flip it, then follow the hallway west and north until you reach an area with a large blood pool. Kill any waiting demons and spectres then press the eye switch on the south wall between two red key pillars (you can also find an invulnerability powerup here on I'm Too Young to Die (ITYTD) and Hey Not Too Rough (HNTR) skill levels), then backtrack to the door leading to the yellow key area. Just before this door you will see a previously-barred doorway on the right which you can now enter - climb the stairs and kill the waiting demons and chaingunners, then step on the red lift and flip the switch to be carried down to the floor below.

Head north around a gray tech structure until you reach a computer skull switch and press it, which will cause a cyberdemon and an arch-vile to teleport in behind you. Fight or avoid these monsters then head to the south side of the structure to find another switch which will lower the lift so you can get out. Backtrack to the switch that required the red key and look north to see that three doorways have opened - the left doorway leads to a supercharge, the middle doorway leads to a box of rockets and a box of shotgun shells, and the right doorway leads to an energy cell pack. You can only go through one door, as the other doors will be permanently sealed.

Follow the blood passage to an area with two demons, where you will see another three doorways in front of you. The left doorway leads to a box of rockets and a box of shotgun shells, the middle doorway leads to an energy cell pack, and the right doorway leads to a megaarmor; as before, you can only choose one door to go through. Head through whichever passage you choose and you will drop into a large fleshy room guarded by a cyberdemon, as well as an arch-vile and other monsters overhead. Head round the red rock column in front of you to find a switch, which will lower the column and reveal a pentagram which serves as the exit teleporter. Fend off the monsters' attacks until the column has lowered then step on the pentagram to finish the level.

After flipping the switch that raises the bridges to the yellow key, look north to see a hole in the wall below. If you run off the ledge you can drop into the hole to find a plasma gun on all skill levels, and a megaarmor on Hurt Me Plenty (HMP) skill level or lower.

* The vertex count without the effect of node building is 5379.