MAP08: Donnybrook is the eighth level of Icarus: Alien Vanguard, set in a courtyard on Beta Pictoris 3. It was designed by David Hill (Mentzer) and uses the music track "Classic Evil" by Tom Mustaine. 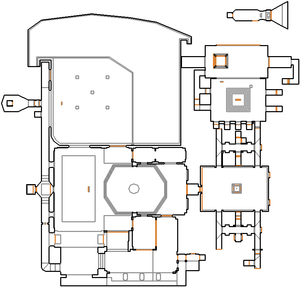 Map of Donnybrook
Letters in italics refer to marked spots on the map. Sector, thing, and linedef numbers in boldface are secrets which count toward the end-of-level tally.

Open the door and grab the super shotgun, then head through the side passage where you can access the hall with the mancubi. Flip the switch in the middle to open the water vat, and watch out as cacodemons emerge from the water. Flipping the switch also opens a passage northeast of the switch, so go through that passage to the other side. Open the door to the east room, and you will be presented with a puzzle to reach the yellow skull key in the middle.

First, hit the switch on the left side of the far wall, then hit the one that appears to your right. You will open the northern side of the central column, where you will see the yellow key floating. Enter from this side to teleport into a corridor. Turn around and flip the switch, then go back into the room and use the southern side of the column to teleport to a different corridor. Do the same thing, and then use the eastern side this time. Repeat, and then take the western side. When you turn around and go for the next switch, a barricade shows up behind you. Flip the switch to lower the barricade, and notice that enemies are in the corridor directly ahead. Go back down and use the eastern side to teleport to that corridor and head through the new lit corridor. When it branches left, go to the switch and another barricade will block you in, while a chaingunner appears in the cage to the north. Flip the switch to remove the barricade, then go back to the room and take the western side. Head into the new corridor again and flip there are two branches each with a switch. Take the one with the megaarmor on it, and flip the switch, as well as the one behind it, then leave the new hall facing east and there should be a new switch here. Flip it, then run back into the room taking the eastern side. When you teleport, run backwards into a new room. In here, there is a two-sided switch. Flip the first side you see to reveal another switch, which opens up all the sides of a shack with a plasma gun inside. The other side opens a way out to the west but also reveals chaingunners to your position. Go through the new opening and head north into the plasma gun room. Collect the plasma gun from the west side, as the other sides will teleport you back to a corridor. When you collect it, you trigger the other doors to close and a closet with revenants to open behind you. Try to leave from the box and you will teleport in front of a switch. Flip it to be inside of a chaingunner cage, and another wall will lower revealing a teleporter. Take it to reappear back in the plasma gun room. Now, to get the key, you need to repeat what you just did, and that is to enter the box from the western side. Leave the box and you will teleport to the chaingunners cage. From there, quickly teleport back to the room and turn left through the door where the mancubus is. The corridor behind him holds a shotgun guy and another door that has a teleporter. Both of these doors open once you head into the box, but they close shortly, so you need to be quick. You will probably fail this a few times, usually due to the monsters, but if you are fast enough, you will make it to the teleporter and finally acquire the yellow skull key.

After you get the key, exit the room and head south towards the metal wall. This is a yellow door and it reveals a passage with a number of monsters inside. First, go around the bend until you find a mancubus on your right along with a silver lift. Use this lift to collect the blue skull key. Then head back down and to the east towards a switch. Flip it to lower a lift and flip the switch on the other side, then use the teleporter. The last switch you pressed reveals a switch inside of the courtyard in front of where you teleported. Head out through the open door on your left and go to the switch. Pressing it lowers the red key, but also reveals a closet behind you with a chaingunner inside and teleports some monsters into the courtyard. Get back inside after you grab the key, then open the yellow and blue doors near the closet to find the teleporter. Flip the panel on the right to exit.

The title "Donnybrook" is a slang term for a brawl or riot. It comes from Donnybrook Fair, once held in the district of Donnybrook in Dublin, Ireland from 1204 to 1855, which became infamous for violent and drunken behavior.