MAP08: Dripping Oven Oil From Your Third Arm is the eighth map in the DMP2013Z.wad mapset of Doomworld Mega Project 2013. It was designed by Conor Maddin (ClonedPickle) and uses the music track "Dance of the Sugarplum Lunatic," originally composed by Mark Klem for Memento Mori II based on "Dance of the Sugar Plum Fairy" by Pyotr Ilyich Tchaikovsky. 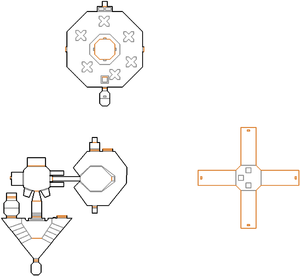 Map of Dripping Oven Oil From Your Third Arm
Letters in italics refer to marked spots on the map. Sector numbers in boldface are secrets which count toward the end-of-level tally.