MAP08: Garden Base is the eighth map of Scythe. It was designed by Erik Alm, and uses the music track "Dark Halls" from Doom. 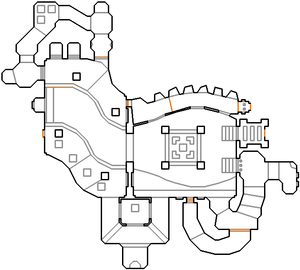 Map of Garden Base
Letters in italics refer to marked spots on the map. Sector numbers in boldface are secrets which count toward the end-of-level tally.

Look out for the mancubi on the walls as you head through the grassy floor going east. You will find two staircases here, so take the one that is not blocked to find a switch to open the bars blocking the other staircase. Simply follow the path on the higher floors to reach a switch which builds a bridge to the other side. Three doors will open when you cross there; the two in front reveal imps while the one to your immediate left will take you down a path which leads to the red keycard. Press the switch at the end of this path to return, and then open the red exit door. When you attempt to go to the barred exit switch, several heavy weapon dudes will teleport around you. Approach the bars and wait for them to lower.