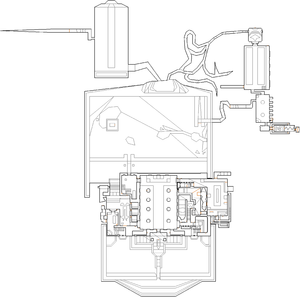 Map of Garden of Delights
Letters in italics refer to marked spots on the map. Sector, thing, and linedef numbers in boldface are secrets which count toward the end-of-level tally.

Kill the thug ahead of you then go up the steps to a blue-and-red door at the top; you can open it by pressing the button on the wall opposite. Go through the door to a large entrance hall and clear the waiting thugs, phages and buzzers, then press the button by the south-west door to open it and go through to a tiled hallway. Follow the hallway north and west then turn left to see a black door with another button next to it, press this button to open the door then go through and kill all the thugs waiting in the next room. Climb the steps by the east wall, then run south over a long block to get to a platform with a breakable vase on it, which will open the west door, then go through and push past some thugs to flip a switch at the end of a short tunnel.

Go back to the entrance hall, where a barrier in front of the north-west door has lowered; ignore that door for now and press the button next to the south-east door instead to open it, then head straight forward past a buzzer to a second door and press the button next to it to enter a room with a red floor. Turn right and right again to see a staircase then start climbing it; you will hear a lift lower on your right, so go back to it and ride the lift up to a ledge then turn right and right again to find a switch - flipping it will lower a barrier blocking the north-east door in the entrance hall. Go back to the hall and press the switch by that door to open it, then head straight forwards towards a lift (watch out for a stealth waiting around a corner on "Let's rip them apart!" (LRTA) skill level or higher) - behind you and to your right is a vase in an alcove, and entering that alcove will lower the lift.

Ride the lift up to a walkway and follow it round a corner - a compartment holding thugs and one or two androids will open on your right. Dispose of them then run south across two platforms with more thugs on them, which will lower another lift on the west side of the room; get on this lift before it rises and press the button at the top, which will open a door behind you and release some thugs. Go through that door and follow the passage past a buzzer to another button which will open a door on your right. Go through the door and walk over the metal step to your left to open a third door behind you, then follow the passage behind it until you run north over two gaps; stop as soon as you cross the second gap to avoid a crusher trap, then run past it to find an uzi next to another switch.

Flipping the switch will lower a barricade later in the map. Go back to the entrance hall and press the button by the north-west door to open it, then head up the steps in the next room to find two switches in a corner. Press the left (south) switch to open a door in the north wall then go through it and head straight forward to enter a large garden. Head north-west towards a stone structure next to some water and press the button on its east side, then run west through the water to get on a lift that lowers and ride this up to the next level. Continue east and south-east to a couple of brick steps and use them to leap over a stream, then continue south-east to two more steps and climb them before running north to cross the stream again. You are now on the highest level of the garden - walk north between two hedges to find a hole leading down to a dark tunnel.

Follow the tunnel down until you reach a tall lift, activate it and kill some waiting thugs before riding the lift up. Slay two more thugs waiting at the top then head forward to drop down some more holes that lead to a prison. Go through the north doorway and follow the passage to a hall full of hanging bodies, then head up the steps on your right and fight your way past some androids to reach a button at the other end. The button will open a large door on your left - go through it and flip a switch on the wall ahead to open a door on your left, then open it to enter a maze of tunnels. Head in a south-western direction to get outside and find yourself on a rockery overlooking the large garden, then proceed north-west down another narrow passage to reach a grassy area protected by thugs and androids. There is a narrow gap in the middle of the west hedge - go through it and fight off one to three thugs, then enter the dark tunnel behind them to finish the level.

* The vertex count without the effect of node building is 1985.