MAP08: Gateway is the eighth map of 1000 Line Community Project. It was designed by NaZa and uses the music track "On the Hunt" by Robert Prince. 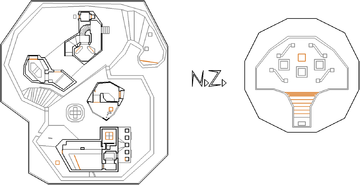 Map of Gateway
Letters in italics refer to marked spots on the map. Sector, thing, and linedef numbers in boldface are secrets which count toward the end-of-level tally.

Collect the shotgun in front of you then head south-west and south round a fiery building to find some steps going down; descend the staircase and head east until you walk between the wood and vine-covered buildings in this area. Turn right to see some square stone columns and go to the southern-most column to find a button that will open the metal door behind you. Kill the demon and imps waiting behind the door then go through to a chamber containing a super shotgun, shotgun shells and the yellow skull key. Taking the key will close the entrance to the room and lower the surrounding wall to reveal imps (plus spectres on Hurt Me Plenty (HMP) skill level or higher); press the skull switch in the north-west corner to open the door blocking the room entrance so you can escape.

Go back to the start point and look north-east to find an exit door requiring the yellow key; open it and kill the waiting imps or Hell knight then step on the white teleporter to reach a small arena with marble blocks. Collect the super shotgun, boxes of shotgun shells and megasphere (or invulnerability on I'm Too Young To Die (ITYTD) and Hey Not Too Rough (HNTR)) before heading down the steps, as three teleporter pads will lower and start producing various monsters, mainly imps but also revenants, knights and multiple arch-viles - use the brick walls at the edges of the arena as cover while fighting them. The column in the middle of the arena will eventually lower to reveal a white teleporter, which you can step on to finish the level.

The blue skull key appears in a different location on each skill level, although finding it is not required to finish the level.

On HMP, a chainsaw appears in the location that the blue key occupies on ITYTD and HNTR. On other skill levels, the chainsaw is moved to the blue key's location on HMP.

With both keys, go to the wooden structure north of the yellow key building and look at its east side to find a blue key door. Open the door and kill any waiting enemies then press the button in this room to lower a nearby lift, which you can ride up to find a rocket launcher (or invulnerability on UV and NM) next to a teleporter that will send you to the exit door.

* The vertex count without the effect of node building is 857.