MAP08: Graverobbers is the eighth map of the megawad Scythe 2. It was designed by Erik Alm and uses the music track "Great Pyramid" from Illusion of Gaia. 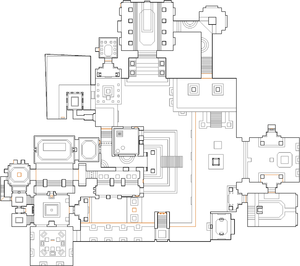 Map of Graverobbers
Letters in italics refer to marked spots on the map. Sector, thing, and linedef numbers in boldface are secrets which count toward the end-of-level tally.

At the start, go around the fountain and approach the bars to access the outside area. Move forward, turning left at the end and climb up the stairs to your left to enter the building. From the entrance of the building, turn left at every intersection until you find a switch. Press it and climb the stairs back up, then turn left and move past the torches to your sides. From here, make a hairpin turn to arrive at a room with a switch. Flip it to remove the bars next to it, allowing you to move past them.

Here, turn left and lower the wall at the top of the stairs. Go left and follow the corridor to its end, turning left twice to reach a switch. Use it and make your way to the right side, where a rocket launcher is now accessible. Drop down from this ledge and continue forward until you face two pharaoh statues in front of a wall. Turn left here to access a large room then move towards the left side corridor and flick the switch at its end to lower a wall on the opposite side corridor.

Proceed through it and make a right at the intersection. Move straight forward until you reach a wall, where you have to turn right. Again, progress forwards to a room with many pharaoh statues. In the middle of this room there's a switch that will lower the yellow key in the starting room. Drop down the window to grab the yellow key, then make your way past the pillars between the chaingun you collected at the start. On your right are yellow bars: raise them and climb up the stairs, turn left and move towards the skull marked yellow door to the left of the pharaoh statue in front of you. Enter the building, climb up the stairs and go through the door to your left. The exit portal is straight ahead.

* The vertex count without the effect of node building is 2526.