MAP08: Harmany is the eighth map of Plutonia 2. It was designed by Tango, and uses the music track "A Game Score" by Jamie Robertson. The par time defined in MAPINFO is 2:00. 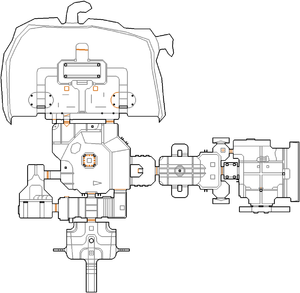 Map of Harmany
Letters in italics refer to marked spots on the map. Sector numbers in boldface are secrets which count toward the end-of-level tally.

Drop down and pick up the super shotgun, then enter the door. Ahead you will find a large courtyard with enemies, kill them as necessary then climb the steps onto the ledge overlooking the courtyard. Go north into the next open area. Kill the enemies here and then cross the bridge to get the blue skull key, looking out for an ambush that follows. There is a blue door to the southwest, open it, and the red skull key will be directly to your right. Another ambush is triggered, so kill the monsters and open the red bars to get the yellow skull key, then head for the yellow door nearby. Dispose of the enemies in the next room, climb the steps, then open the next door. Press the gargoyle switch and get rid of the monsters that teleport, then climb the stairs again. This time, the door east of the courtyard will be open, with plenty of enemies inside. Stepping past the door releases an arch-vile behind you, so watch out for that as you go through. After killing everything, open the demon face on the opposite end into a courtyard. Once more, kill all the enemies present, and press the switch, killing two mancubi who will try and stop you from going past the lowering wall that leads to the exit.

* The vertex count without the effect of node building is 1788.