MAP08: Impure Liquids is the eighth map of Community Chest 3. It was designed jointly by Andy Leaver and Eric Baker (The Green Herring), and uses the music track "Infuscomus" from Blood. It is set at a mountainside sewage treatment plant owned by the UAC.

The title of this level refers to the nukage that is processed within the plant in this level. 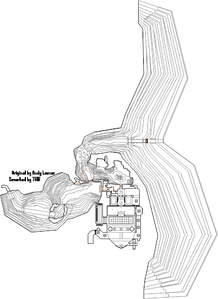 Map of Impure Liquids
Letters in italics refer to marked spots on the map. Sector, thing, and linedef numbers in boldface are secrets which count toward the end-of-level tally.

Proceed through the area until you get to the entrance into the building. Open the door, and press the switch to activate the elevator. Take the elevator up, open the next door, and pull the next switch to lower the floor. Head east, go south, and press the red-light switches in both of the side rooms. Head south into the next room, down the stairs, and go west. Pull the switch to raise the bridge, cross it, and enter the eastern corridor. Press the switch, get on the elevator in front of the red key before it rises, and take the red key. Head north all the way to the red door, open it, and exit the building. Head west, go north, and run east across the invisible bridge into the portal.

After the first tunnel in the level, there is a shotgun and some shells (a box of shells on Hey, Not Too Rough or lower, 8 shotgun shells on Hurt Me Plenty or higher) to the north. Grabbing it causes an alcove to open with an imp inside. Following this, firing a shot causes 9 imps to teleport around you.

After lowering the floor near the entrance into the building, you can use the teleporter southwest of it to return to the first area.

If you fall into the nukage in front of the red key, you can use teleporters at the east or west of the sewage tunnel to return to higher ground. There is also a radiation suit at the far northeast of the tunnel.

Approaching the switch to the lift in front of the red key causes two closets to open containing heavy weapon dudes. Inside each of these closets are 8 shotgun shells and a medikit.

When playing the map using a software renderer, four linedefs in the first area, linedefs 1184, 1476, 1823 and 3044, appear as Hall of Mirrors effects. This is an oversight resulting from Baker mistakenly using ZenNode on the level after applying a pre-release bugfix, rather than BSP, the node builder he had been using. If BSP is used to build nodes on this level, or the level is played with a hardware renderer, these Hall of Mirrors effects do not appear. For the same reason, a slime trail appears above the cave entrance at the beginning of the level.

The east side of the door to the lowering floor (linedef 24) is set as upper unpegged, causing the door texture to not move with the door itself when it opens and closes.

The nukage directly under the three lights in the far east of the sewage tunnel (sectors 215-218) does not deal any damage, unlike the rest of the nukage in the level. This and the above bug are oversights on both designers' ends.

* The vertex count without the effect of node building is 3921.

At the start of the project, the MAP08 slot was taken by beanenator. Near the end of its development, it was given the name Special Surprise Inside. Eventually, the level was submitted to and accepted by Andy Leaver. However, when Baker took a look at the level during the compilation process, he and Leaver discovered that the map was of such subpar quality that it was unusable. As a result, the two of them agreed to replace it with a different level. Leaver took an old, unfinished map of his and finished it, while Baker subsequently detailed the level and made some gameplay changes, most notably replacing the only secret in the level (a simple hidden door) with the two seen in the final version, requiring the activation of two switches to enter the room where the red key is, having Hell knights appear on the lower floor after raising the bridge and getting the red key, allowing access to the first area from the final area after heading through the red door, and completely changing the monster placement after the red door.

The original title was Loco. Other suggested names later on were Sewage Contagion and Purification, the latter suggested by Baker. The final title, Impure Liquids, was Baker's suggestion as well.

The enemies appearing out of thin air in the final area, the view of the sea at the exit, the invisible bridge, and the portal exit were all Baker's additions.