MAP08: Metal is the eighth map of TNT: Evilution. It was designed by John Minadeo and uses a music track shared with MAP27: Mount Pain and MAP30: Last Call. 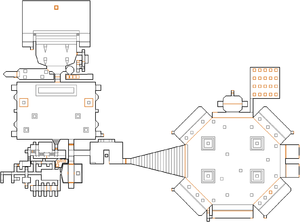 Map of Metal
Letters in italics refer to marked spots on the map. Sector, thing, and linedef numbers in boldface are secrets which count toward the end-of-level tally.

This is a level with a substantial number of dangerous traps.

You begin in a narrow maze. The fastest way out is to go straight, turn left at the first intersection, and then take the first right. This will take you to a door, behind which is a small room with some shotgun guys. Turn left to enter a dark room with a winding staircase, being careful of the opposition inside. Go up the staircase, but be careful - on Hurt me plenty and above, as soon as you cross the halfway point of the first flight of steps, two traps with chaingunners will open, and in the dark it is very difficult to find them. The first chaingunner alcove is right behind you on the west wall, and the second is high up on the wall north of you. Eliminate them, head up the steps, and proceed to the door ahead of you.

You will now find yourself in a very large room with two "imp cages", as well as two lava-filled alcoves with imps. Four walls in the corners of the room will lower as you enter to reveal some enemies (and items). Dispose of all the enemies and continue around the raised platform to the door in the north, which automatically opens as you approach it.

This next large room overlooks the red key, but the red key is inaccessible due to a ledge at the northern end of the room. Dispose of the enemies and look for the panel with the lightning bolt symbol on the eastern wall. This will reveal a mandatory secret area with the necessary switch to lower the ledge, which contains a number of tricky traps and encounters. To navigate the area safely, follow the following steps:

With the red key now accessible, enter the water-filled courtyard and grab the red key. This opens two traps in the southeast and southwest of the courtyard. Deal with the enemies. If the ledge has risen back up and blocked your entrance back to the main room, the southwest alcove has a switch to lower it back down.

Backtrack to the "imp cage" room and go to the red door on its southern wall. Turn right, follow the U-shaped room to its end and open the door.

You should now face a descending staircase into a very large octagonal room, with alcoves near the ceiling in the northeast, northwest, southeast and southwest. On Hurt me plenty and below, the room is empty, but on Ultra-Violence and above, there are eight shotgun guys patrolling the room. Firing a shot will result in a teleport trap triggering, filling the room with up to 20 enemies scattered on the top ledges and room floor. Prioritise the chaingunners due to the lack of cover in this room. As you fully enter the room, four more shotgun guys will rise out of the slime pits, so deal with them accordingly.

Once they are disposed of, you can then proceed to solve this room's puzzle. Proceed to the north wall of the room, and notice two switches. Flip the left one, and a pillar behind you will rise from the ground to the ceiling. After this, flip the right switch, and the pillar will behave like a lift. Step onto this pillar and ride it up, then jump off into the northwest alcove. This will trigger the back wall of the alcove to open, releasing some enemies. Kill them, then flip the switch in the western corner of the alcove.

Jump back down to the octagonal room's floor, and notice a new area has opened in the east wall. Flip the right switch on the wall, and a pillar in the northeast corner of the room will rise up. After this, flip the left switch, and the pillar will behave like a lift. Step onto this pillar and ride it up to the northeast alcove. Once again, the back wall will open, releasing some monsters and revealing a switch, this time in the eastern corner. Flip the switch.

This will once again, open another area in the room's east wall. However, as you approach the switch, you are likely to be teleported up into the southeast alcove (in case the teleport does not happen, push the left switch to raise a pillar in the southeast, then the right switch to make it lower). Ride the pillar up to the southeast alcove. If you were teleported, moving from the spot will open the back wall; if you used the pillar, running off the pillar onto the alcove will open the back wall. The switch for this alcove is in the southern corner. Flip it and return to the ground floor.

This opens a new area on the south wall of the octagonal room. Once again, there are two switches. Flip the left one, and a pillar on the southwest of the room will rise up to the ceiling, as with the previous areas. However, when you flip the right switch, the pillar does not lower, as expected; instead, a concealed door opens to the right, releasing a shotgun guy. Enter the passageway, turn right and kill another shotgun guy. As you touch the lift ahead, a trap opens behind, releasing a shotgun guy (on Hey, not too rough and below) or a Demon (on Hurt me plenty and above). Kill the enemy, then take the lift up to the southwest alcove.

As you step onto the alcove from the lift, the back wall of the alcove will open, and the switch to be flipped is found on the west corner of the alcove.

This opens the exit area in the north wall of the room, along with some opposition. Kill them and proceed to the exit; however, do note that as you cross the midpoint of the newly opened room, two traps will open to your left and right. Enter the exit chamber and flip the switch to finish the level.