This level is known as Minos' Judgement on PC, rather than just Minos, and its author was John Anderson (Dr. Sleep). Changes for the PlayStation port were authored by Tim Heydelaar.[1] 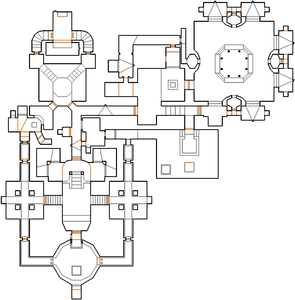 Map of Minos
Letters in italics refer to marked spots on the map. Sector, thing, and linedef numbers in boldface are secrets which count toward the end-of-level tally.

Take the shotgun in front of you if needed and exit the room through the south-east door. Head east through another door, then go east up a staircase to a blue door. When you reach this door, turn right and press use on the white wall in front of you to open a door to an outdoor area. Run south to the platform holding the blue keycard and take it.

Backtrack to the hallway south-east of the starting room and go south through a blue door. Climb to the top of the staircase, then turn round and jump to the ledge in the north-east corner. This will open an alcove containing various monsters - kill them and take the red keycard from inside the alcove.

Drop to the ground floor and go north through the blue door, then follow the hallway north and east through a door you opened earlier. In this room, go through the red door on the east wall to an outdoor area with numerous monsters. Climb the staircases on the central structure and take the yellow keycard in the center.

Return to the room where you found the red keycard. Climb down the east or west staircases and through the blue doors at the bottom, then follow the corridors south and west/east until you reach a room sealed by yellow skull bars. Open them and press the switch on the south wall to reveal the exit teleporter. Step on it to finish the level.

One blue skull bar on blue door in the east side (lindef 115) has both an improper Y-offset and a lower unpegged flag rendering it invertedly. This is a remnant of the wall in the PC version where the engine draws it without issues.

* The vertex count without the effect of node building is 1187.