MAP08: Obsidian Hotbed is the eighth level of Resurgence. It was designed by Josh Sealy (Joshy), and uses the music track "The River of Fire" by Kevin Schilder, taken from Heretic. The map is a remake of MAP10 of Surge. 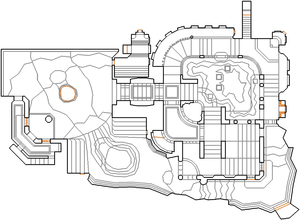 Map of Obsidian Hotbed
Letters in italics refer to marked spots on the map. Sector, thing, and linedef numbers in boldface are secrets which count toward the end-of-level tally.

Obsidian Hotbed is orders of magnitude more difficult than the levels that have come before it. This will become apparent almost immediately. Pick up the weapons in the small alcove you start in, and as you take the chaingun, the wall will open, revealing the main area of the level. Take the berserk pack and the megasphere just in front of the start area. The berserk pack is especially important, as it can be used against less dangerous monsters such as imps and demons to conserve ammo, of which there is not much available. Your first priority should be to get the rocket launcher and the plasma rifle. Killing the numerous enemies that attack you from all sides as you go, head to the right from the start and turn left when you come to the end of the hallway. Turn left again when you enter this section and look for the rocket launcher on the right. Go back along the walkway, then out into the hallway and down the stairs. The plasma rifle can be found at the end of the short tunnel. As you take it, the wall will open in front of you, revealing six revenants.

Leave the tunnel and turn right towards the large curved stairs. Kill the mancubi and chaingunners behind the bars on the ledge overlooking this staircase. At the top of this staircase, turn right and go up the next set of stairs. Watch out for the sergeants watching over this section. At the top of the stairs, you emerge into a very dark outdoor area. Clear the monsters here, and be very careful of the spider mastermind in the lava cave down on the left. Once you have killed the monsters here, drop down into the cave and press the two switches. This will trigger a huge ambush to start appearing nearby, the most dangerous part of which is made up of fourteen chaingunners and seven sergeants, all of which appear on every skill level.

Return to the curved staircase, and go through the bars which have now opened. Head along this ledge, collecting the rockets and press the switch. At the far end of the area at the bottom of the staircase, the platform surrounding the yellow skull key and the soulsphere will now lower, revealing an alcove containing four revenants and two arch-viles. The key itself will remain on its own plinth It is important to deal with this using the rocket launcher, and as quickly as possible, as their close proximity to each other allows for large amounts of splash damage.

Press the switch inside the alcove, and take the yellow skull. Medium to high-tier monsters will start to teleport into the area, including revenants and pain elementals. Run up the stairs on the left, then at the top, open the yellow bars and take the megasphere. This will raise two of the four pillars in the central area, which lead to the red skull key. Now go left and go into the hallway leading back to the start. Turn left up the stairs here, then turn left again, and go forward onto the platform with the blue skull key. Turn left and go to the blue bars and open them. Take the four stacked rocket boxes, and now the final two pillars in the central area will raise, making the red key accessible. At the same time, four arch-viles will teleport next to the pillars, and begin to resurrect monsters. Additionally, a cyberdemon will have appeared on the uppermost ledge in the outdoor area, so be aware of that when returning there.

Get rid of the arch-viles as quickly as possible, then make your way back to the start area. The pillars are accessed by running over the gap in the brick wall in the lava pool opposite the start position. This is quite tricky to do, so be prepared for multiple attempts. Keep an eye on your health, as the lava is damaging, and a large amount of health can be lost over enough attempts. Taking this slowly is advised. Take the red skull when you make it to the small platform it is mounted on.

Return to the outdoor area. Being careful of the cyberdemon on the ledge to the right, go over to the small building and open the red bars. At the midpoint of the short hallway past the bars is a small opening. Go through this and follow the tunnel. At the top of the stairs, you will find yourself on a narrow ledge above the hallway you just came from. Go along the ledge, and you will come to an opening leading to the ledge with the cyberdemon. Depending on your ammo supply, you may have to run past the cyberdemon, and into the building at the other end of this ledge, where you can find some chaingunners guarding two rocket boxes and two energy cell packs. Careful when doing this though, as entering the building will cause four revenants to teleport in. The chaingunners are at very close range and the cyberdemon can still hit you if you aren't clear of the entrance. In addition to this, four arch-viles are around the corner. Once you have killed the arch-viles, straferun to their platform, then press the switch. Go back outside to the ledge, and look for the hole in the floor showing the sky. Jump into this hole to exit.