MAP08: Outpatient is the eighth map of Midgard Outlaw. It was designed by Mike MacDee (Impie) and uses the music track "". The map begins the second of two "chapters", which mostly takes place in the corrupt rehabilitation clinic of Dr. Zaal. 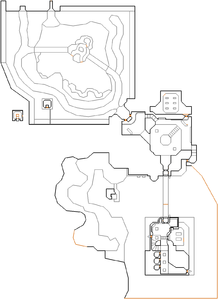 Map of Outpatient
Letters in italics refer to marked spots on the map. Sector, thing, and linedef numbers in boldface are secrets which count toward the end-of-level tally.

Having just killed her captors, Juno attempts to escape her "rehabilitation" at Dr. Zaal's facility.

This map can be completed very quickly if you have no interest in items and secrets. Jump out the window and down to the lower balcony, then go through the building. The front door is locked, and you don't have a key: go upstairs and outside, then jump onto the bridge, bypassing the door altogether. Fight your way through the facility and into the courtyard: on the opposite end of the yard, the exit switch can be found inside the sluice gate, allowing you to escape into the sewers.