MAP08: Pandemonium is the eighth map of Tangerine Nightmare. It was designed by Franck Livolant (franckFRAG) and uses the music track "The Calling," originally composed by John Weekley (PRIMEVAL) for Reverie. 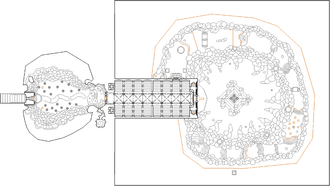 * The vertex count without the effect of node building is 11519.