MAP08: Quarantine (also known as Starstruct, Inc. on the automap) is the eighth map of Doom 2 the Way id Did. It was designed by Chris Bourke and Richard Frei in the style of Sandy Petersen. The par time defined in the DEHACKED lump is 3:30. 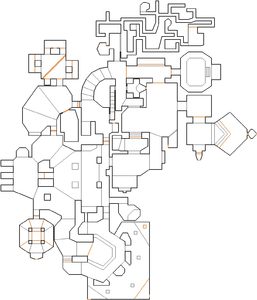 Map of Quarantine
Letters in italics refer to marked spots on the map. Sector, thing, and linedef numbers in boldface are secrets which count toward the end-of-level tally.

In the start drop down to the western outside area (A). In the extreme west of the area use a lift to rise. In the room there are three alcove containing demons (B). Head to the south and go to the end of the corridor with computer panel atop. Enter the nukage pool area (E) and quickly take the blue keycard. The platform will lower. Use the northern corridor to escape.

In the outside area (A) if you have not fallen to the very ground yet, use the northern door, inside where, you open the blue door at the west. Otherwise, if you fallen down (A) use the lift again and in the corridor (B) and open the blue door at the north. Jump over through the lava pit if needed (C). There is no way to get out. At the north enter an alcove leading to a small blue room. There is a yellow key in the corner but if you cross the second half of the room, it will lower down revealing several alcoves that contain monsters and ammo. After all, when you possess the yellow key, leave this room and the lava outside area through the blue door.

Return to the tall outside area (A) and use the lift. In the corridor (B) head south and open the yellow door. In the red brick room head to the southern alcove where you press the skull switch. The platform in the middle contains the red key and an arch-vile. Leave this room.

Now, the fastest way is going through the two blue doors, through the lava pit area (C). When you open the last blue door that leads to the room with deep brown star walls, walk upstairs. Go forth and turn right or go south and turn left to find yourself in the blue room (D). Use the eastern way to enter a computer room. Beware the slow crusher above the some blood pools. Open the red door and press the switch to reveal the room with exit door. Enter the exit door and flip the switch for the ending.