MAP08: Realm is the eighth map of The Plutonia Experiment. It was designed by Dario Casali and uses the music track "The Demons From Adrian's Pen", from Doom. 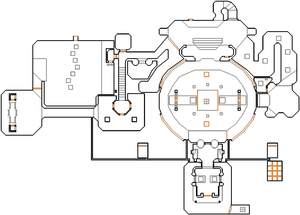 Map of Realm
Letters in italics refer to marked spots on the map. Sector, thing, and linedef numbers in boldface are secrets which count toward the end-of-level tally.

Step into the water ahead and it will drain down, revealing a door guarded by two shotgun guys. Open the door and step through it, watching out for two more shotgun guys waiting on either side, and go forward to a super shotgun between two lifts; flipping the switch here will lower the lifts and reveal (depending on skill level) chaingunners, Hell knights or barons of Hell. Ride the lifts up to a pair of water pits bordered by a walkway and head round to the north side to find a plasma gun (watch out for knights waiting on either side) then go down the steps and head south-east into a watery corridor. Follow the corridor past imps, shotgun guys and one or more mancubi until you get to a rocket launcher then continue on to a chamber where a mancubus and two chaingunners are protecting a small door. Go through this door and press the button on your right.

Go back to the northern-most room, where a door has opened in the north wall and released one or more revenants. Go through this door and climb the steps to a ledge then turn right and press a button at the end of the ledge; this will lower a waterfall behind you and reveal three more revenants. Step past the waterfall and enter the right-hand passage then follow a trail of health bonuses to a staircase that leads down to three switches. Flip any of the switches to lower them and reveal an ambush by chaingunners and spectres, then head west until you reach a room with a large green structure; lower the lifts on either side of the structure and ride them up to the blue skull key. Ready a rapid-fire weapon such as the chaingun or plasma gun before stepping off the lifts, as doing so will cause (depending on skill level) zombiemen, shotgun guys or chaingunners to start teleporting on to them.

Return to ground level and go through the blue key door in the north-east corner. You will enter a n area full of harmful slime as well as several dangerous enemies including zombies, cacodemons, revenants and a pain elemental; blow up the barrels in front of the zombies' platforms to dispose of them quickly. After clearing the platforms, walk up them to a switch and flip it to lower some bars on the east side of the room, which will allow you to reach a lift that leads back up to the corridor with the health bonuses.

Head east back to the first water room and go up the steps, then throw the lever on your left marked with blue skulls; this will open some bars blocking your path to the exit teleporter in the neighboring area. Go to the east or west sides of the circular walkway and approach the exit teleporter, which will cause two chaingunners (or arch-viles on Ultra-Violence or higher) to appear in front of it along with some revenants that teleport in. Approach the exit teleporter - its center part will lower automatically) and climb on to it to finish the level.

There are two teleporters in the water pits below the exit teleporter; you can use these to teleport to the north and south sides of the circular walkway, helping you dodge the revenants which teleport in at the end of the level.