MAP08: Secondary Bridge is the eighth map of Daedalus: Alien Defense. It was designed by Ty Halderman and Gary Gosson, and uses the music track MM_03.MID by Rich Nagel. 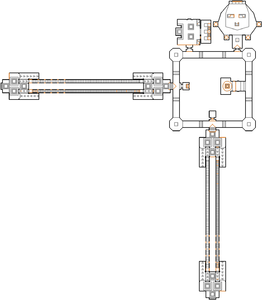 Map of Secondary Bridge
Letters in italics refer to marked spots on the map. Sector, thing, and linedef numbers in boldface are secrets which count toward the end-of-level tally.

Following your escape from the bridge, you drop down a shaft into the smaller and much less impressive secondary bridge. Activating either of the controls reveals that this part of the ship is on reserve power only, and your ally on board has steered the ship into a nearby asteroid belt, resulting in constant small shipquakes. Your overall objective is to steal the captain's scout ship and escape, and the first step towards doing this is restoring power locally.

Go out of the door into the map's centrepiece, a square corridor. Go to the south side and open the door, which reveals a horizontal travel tube leading to Storage. Enter it.

Go to the north-west corner of the corridor and enter the small door, behind which is the power room. Open the microgen room by tripping the green switch. Go in and replace the microgen by walking up to it, then press the red switch to power it up.

Go back to the secondary bridge and activate the auto-targeting system (right console). This will reduce the number of impacts from the asteroids. Return to Storage.

Now that power has been restored on Brig, the other horizontal travel tube, on the west side of the corridor, is now functional. It leads to Scout Bay, specifically the bay containing the captain's scout ship. Enter it.

Once the power on Brig is restored, the vertical travel tube to Officers' Quarters, on the east side of the corridor, becomes activated. Visiting it is entirely optional.

If you didn't get the rocket launcher on The Bridge, you can find one here. Directly opposite the travel tube to Storage is a small alcove containing a rocket launcher and 10 rockets. Shoot the glass to get into it.

* The vertex count without the effect of node building is 2703.