MAP08: Stigmata is the eighth level of Memento Mori II. It was designed by Denis Möller and uses the music track "Unsteady Ground" by David "Tolwyn" Shaw. It contains a separate area for multiplayer competition.

The word "stigmata" refers to the wounds that, according to the Bible, were inflicted on Jesus during his crucifixion.

Civilians have reported that the hordes changed their Drinking Water Supply to a slime producing machine. The slime is now used to eliminate all human lifeform [sic] in this region. The civilians locked some of the doors to stop the demonic invasion, unfortunately it was too late.

Your mission target: find the keys, kill all demons and stop the slime machine. Then find the way back to your mission control and report what you've found. Don't come back without deactivating the machine! 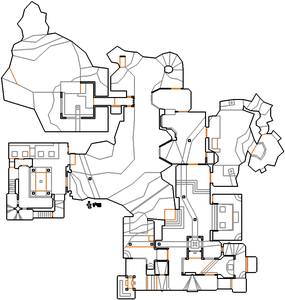 Map of Stigmata
Letters in italics refer to marked spots on the map. Sector, thing, and linedef numbers in boldface are secrets which count toward the end-of-level tally.

You begin in a small cave. Watch for the imps on the raised areas (On Ultra-Violence and above, you also have a revenant to look out for). Run to the platform in the southeast (the slime is damaging) and ride it up. Head east into a corridor and kill any shotgun guys you see. Through a barred window, you should also be able to see a pillbox with up to four imps.

This pillbox is a distraction from the real trap - as you cross the halfway point of the corridor, a shotgun guy (and on Hurt me plenty and above, a chaingunner, will suddenly appear to your right. Kill them as they appear, then use the wall dividing you from them to lower it. This gives you access to a super shotgun, a box of ammo and a stimpack. Continue to the end of the corridor and take the southern door.

This next cave-like area is teeming with imps. You have to deal with imps on the catwalk, imps on a platform as the catwalk turns a corner, and imps in a pillbox. The pillbox contains an arachnotron or two, and at least one is positioned to be able to fire out of the pillbox. If you have your rocket launcher, it is a good time to use it. Continue along the catwalk until you see a platform in the floor, and step on it.

This platform takes you down to a new room with a red door. The red key is on a pedestal, out of reach. This room contains a trap-filled sequence to get the red key:

You are now on the bottom floor of the cave-like area. Proceed north, murdering imps along the way. Find the staircase in the northeast of this area and head up it to a red door.

Beyond this red door is the area behind the "pillboxes" you saw earlier. You have imps, an arachnotron and on Hurt me plenty and above, a chaingunner or two. Mow everything down, proceed through the half-opened door to a large hall. Find the small door in the southeast and open it. Behind it are radiation suits - grab one.

Next, open the big door in the east. Drop down to a slime pit with imps. Head into the alcove with the yellow key. As you approach the yellow key, the walls nearby open up, revealing even more imps (and a shotgun guy on Ultra-Violence and above). Back up and dispose of them as they try to leave the alcove.

Ride the platform in the west back up, and open the door to return to the large hall from earlier.

Head through the green-coloured door in the south. This next area has some spectres, a Hell knight and a baron of Hell (another Hell knight on Hey, not too rough and below). The slime machine is Try not to step on the medikit on the square platform with steps leading to it - it drops you into an area with imps and a lot of barrels - not a good place to be. Go all the way south and find the big yellow door.

The area beyond this yellow door is teeming with former humans of all sorts. Clear them out, head up the steps and flip the switch. This stops the slime machine, as demanded of you... but starts a large ambush in motion. When you leave via the yellow door, you will be wedged in behind four demons and a large number of former humans. Clear the latter out with a rocket launcher (if available), then turn around and deal with the demons as they come.

Head up the steps in the west. As you head up these stairs, you will encounter even more former humans. Two traps will also be triggered: 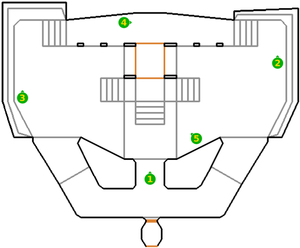 * The vertex count without the effect of node building is 1476.