MAP08: The Core Complex is the eighth map of 32 in 24, a deathmatch megawad. It was designed by Przemek Zimny (alterworldruler), and uses GothicDM 2's MAP12 MIDI by Mark Klem.

It was the eleventh submission to the project, arriving at about five and three-quarter hours into the session. According to the author, it took 90 minutes to build. 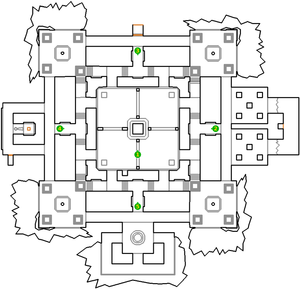 Map of The Core Complex 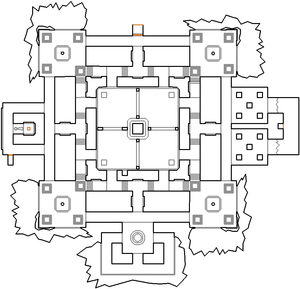 Map of The Core Complex

The Core Complex is quite a large map, but to an extent quite symmetrical in its design. The centre of the map is an open outdoor area, with a large computer tower placed in the middle. The super shotgun, chaingun, rocket launcher and plasma gun can each be found in a different corner of this area, next to its respective large ammo pickup. There are two exits from the central area in each corner, and as the rest of the map is at a lower elevation, there are 8 pairs of staircases, one at each compass point.

These staircases are part of a corridor which completely surrounds the central area. This itself is surrounded by another corridor and four corner rooms which form the majority of the lower level of the map. The corner rooms each contain a box of shells, and link in to the inner corridor, but the outer corridor is also accessible from the inner corridor by a short connecting passage on each side, each one containing a different weapon and its large ammo pickup. These connecting passages are also the locations of most of the spawn points (see below).

Where the map loses its symmetry is in the additional sections found along each side of the outer corridor.