MAP08: The Jail, designed by Haggay Niv, is the eighth map of Hell Revealed. It uses the music track "Mist Ache" from Rise of the Triad.

This is some kind of jail. You wonder why the hell are monsters inside the cells, after all, they are the bad guys and you are the good guy(s). Your serial number is: 2.718281828. 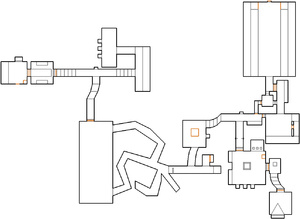 Map of The Jail
Letters in italics refer to marked spots on the map. Sector numbers in boldface are secrets which count toward the end-of-level tally.

Run past the demon at the start to the next room with shotgun guys and a super shotgun. The next door leads outside with some perched and caged monsters. If you grab the box of shotgun shells here, the cage with demons will open. Take the door leading north and you will find a fork. Go right first, and through the door into a hallway with plenty of caged monsters. Follow the hall to another door where you will find a larger hall with shotgun guys and chaingunners on the ground floor and demons on the ledges, plus imps behind the cages on those ledges as well. The other end of this hall has a switch, so flip it and go back to the fork, heading west this time. Down the steps here, you will find a few dead bodies and a chainsaw on a block. Be careful if you intend to get the chainsaw, as a crushing ceiling will activate upon stepping on the block. Continue south into the water and head west, where some bars are lifted after you pressed the switch earlier. Navigate through the water until you reach an outdoor rectangular yard, then go to the door to the north. Open it and take a left at the fork, opening the next few doors to find the exit switch in a room with a mancubus and a caged cacodemon. Grabbing the soul sphere in the exit room reveals some pain elementals, so watch out if you intend to grab it.

* The vertex count without the effect of node building is 460.