MAP08: The Pit is the eighth map of Community Chest 2. It was designed by Gene Bird, and was originally released standalone as part of his Blind Alley series. 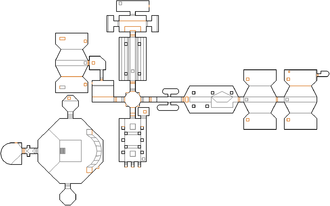 You cannot access the door on the top of the staircase in front of you, so you must find the switch for it. Behind your starting point, there is a staircase. The lowest step of the stairs can be lowered as a lift, and behind it are two switches. The eastern switch opens the door at the top of the staircase where your starting point is, while the southern switch opens an optional room to the south. To get back to the starting point, you must ride the lift and go up the staircase, jumping back to the ledge. Flip the switch in the western room and the northern door in the main room will open. Enter the teleporter in this room to materialize in a chamber. Two of the columns here have switches, press both of them and head north into a room with a large elevator. Do not press any switches here, head west through the passage instead (if you didn't press one of the two switches in the previous chamber, the door may not be open, so make sure you press both switches). In the empty room, approach the northern wall and it will open. Press the switch; it opens up a door back where the elevator was. Go back there and press the switch on your level to move up to the now open door. Pass the next monster-filled chamber into another room where, if you move around, several doors will open. The northern room has the red skull key and a switch on the right side, which will raise the door on the east side of the elevator. Head back there and press the next switch to reach the eastern portion of the map. Head all the way east, and drop towards the north picking up the blue key. Now head all the way back to the elevator and raise it all the way to the top, where you started originally. Make sure to hit the switch here (it is not marked, but it is a blue key switch) and head back into the chamber you teleported into. In the far corner, a door is open revealing a little alcove with a switch. You will have to press three switches here to reveal the exit. Be mindful of teleporting monsters as you do.