MAP08: The Reactor is the eighth map of Requiem. It was designed by Iikka Keränen, and uses the music track "Under Death" by Mark Klem. The objective is to escape from jail, make your way through six floors of a mining facility to reach the titular reactor, and activate its self-destruct sequence. 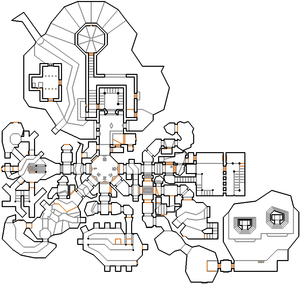 Map of The Reactor
Letters in italics refer to marked spots on the map. Sector, thing, and linedef numbers in boldface are secrets which count toward the end-of-level tally.

You need to shoot the switch slightly to your right to escape from the jail you are in. Open the door to head outside, and go down the hill fighting monsters until you reach a door. Enter it, then turn right and follow to a fork. Head up the stairs to the left, going past the yellow door to the balcony back outside to find a switch. Press it and return to the fork. Go up the stairs to a chainsaw and enter the door. Kill the demons and press the switch. Now return to where you entered the building to find a lift that is lowered with a Hell knight or a baron of Hell depending on your difficulty setting. Head onto the lift and it will rise up, go through the door here and turn right to get the yellow key. Now head back to the yellow door and open it, going downstairs to a lobby where you will see the large elevator to the mining facility. Shoot the switch behind the reception counter to open the door here, then open the door behind it to trigger a wall to the east containing a mancubus (or a cacodemon on Hurt Me Plenty or lower) and a switch. Press this switch to open the first area in the big elevator and go down to it (labelled 1).

Kill the imp that is directly in front of you and cross over the canal till you find a switch. Hitting this switch opens the wooden wall to a large shaft. Use the down key on the elevator here to go down. From here, take the southern lift up, then follow the narrow corridor until it loops back to the shaft, where you will see an elevator switch pointing down. Use it, and it will not only lower the platform you are on, but the northern one as well. When that one lowers all the way, use the switch here to rise it up again to the next corridor. Drop down to the medikit and hit the switch on the wall in this small room, then return to the shaft via the southeast opening. When you return, you will find that the western lift is down, so drop down here, kill the imp(s) then press the switch at the end here. Now press the switch to rise back up to the bottom of the shaft, and press the up switch on the elevator here to rise back up. Return to the main elevator to find that it is now on level 2.

There is a large nukage flow in this open-aired room and some monsters. Head for the southwest corner close to the armor to find that the flow leads downward into another chamber. Kill the imps here and press the switch, then use the nearby lift to get back up to the top of the nukage river. Again, return to the main elevator and it will be at level 3. Go through the next mineshaft to a room with several imps in cages. Take the lift down and find the switch in this room. After pressing it, return to the main elevator (you can take a small shortcut by leaping into the nukage and using the teleporter, bypassing the need to use the lift) and you will now be on level 4. Go through this next shaft, going into a side room if necessary (probably after witnessing a barrel take out a shotgun guy in the corridor), then go all the way east. In this next room is a mancubus and several other monsters. Disperse of them and climb the stairs to reach the ledge where a switch is. Hit it and return to the main elevator to start the final level of the mines: level 5.

Take out the monsters in this corridor, then head through until the first left. Take this path and you will eventually find the blue keycard. Now return to the corridor and head for the three doors to the east. Enter either the left or the center doors (which are blue doors) to a bright room. Look out for an ambush just before entering the next door here. Behind the door, flip the switch here, then return to find the other door in the three-doors area opened, with a revenant inside. Follow this path, down the stairs, through the next door, and up the stairs to another switch. Flip it and return to the corridor, being wary of the mancubus (or cacodemon) in the previous room as you go. Back at the corridor, head back to the junction where you split off to get the blue keycard, and you will notice that you can access the corridor to the south. Follow this cave to several rooms with barrels, and you will find an elevator leading upwards and a couple of radiation suits. You need to grab one of these, then use the up arrow to rise up to the next door. Kill the mancubus (or cacodemon) in the next room, then open the next door to find some Hell knights and the reactor. Press the self destruct switch to blow it up and exit the level.

The Reject lump for this level is one byte too short. However, this is not large enough to affect demo recording and playback.

At the east of the map, if you run onto sector 333 (a lift with a chaingunner on it) when it lowers, and do not get off before it rises again, you will be unable to escape unless you activate the noclip cheat.

This map is unplayable in multiplayer, as when a player spawns in sector 10 (via thing 35) and attempts to leave the compartment they are in, they will trigger a walkover linedef (linedef 2431) that causes the floors of every untagged sector in the level to rise to their ceilings, preventing anyone from moving. The Deathmatch Repair File created by Steve Terry will remove the action of this linedef and allow the level to be playable.

One soul sphere is inaccessible in single player and cooperative modes on this map making 100% items impossible. It resides in sector 318 which lowers via a switch (linedef 2402) in a small compartment (sector 205) containing only a deathmatch start. Unless you activate the noclip cheat, there is no way to enter this compartment or the one with the soul sphere.

* The vertex count without the effect of node building is 1940.

The main elevator operates on a simple "SR floor lower to lowest floor" and "SR floor raise to next highest floor" system. However, it uses a fairly ingenious method to "unlock" lower floors as each area is completed and its corresponding switch pressed.

At the beginning of the map, the sector at the entrance to each of the five wings (sectors 3, 5, 6, 7 and 8) has both its ceiling and its floor at 0 units. The edges of each sector form five of the eight lift shaft walls. Each sector has a corresponding isolated linedef (linedefs 2480-2484) outside the playable area. However, while the back sidedef of each line is tagged to the corresponding sector, the front sidedef of each line is tagged to a zero-width sector (sectors 328-322), with ceiling and floor height equal to the floor height of the opening area of the corresponding wing.

Thus, when each switch is activated, the lowest neighbouring floor to the elevator becomes the floor of the next wing, and the elevator can be lowered to access that wing, but no further (since the remaining entrance sectors still have their floor at 0 units). Since every wing is located deeper than the previous one, every consecutive entrance sector lowers its floor to a progressively lower height once the previous wing is completed and the corresponding switch flipped, revising the lowest neighbouring floor to the elevator and allowing the elevator to lower further.