MAP08: Time Is Tickin' Out is the eighth level of Kama Sutra. It was designed by Adolf Vojta (Gusta) and uses the music track "Task Force" from Rise of the Triad by Lee Jackson.

Light effects - that's the basic idea this map is aimed at. So you could see on the exit square how the day is running from afternoon to evening. 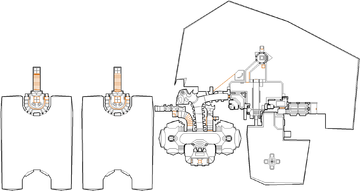 Map of Time Is Tickin' Out
Letters in italics refer to marked spots on the map. Sector numbers in boldface are secrets which count toward the end-of-level tally.

* The vertex count without the effect of node building is 2432.