MAP08: Tomb of Malevolence (No Rest for the Living)

MAP08: Tomb of Malevolence is the eighth and last map of No Rest for the Living. It was designed by Arya Iwakura and uses the music track "Shawn's Got The Shotgun". The par time is 1:45. In the version released as an official add-on, it utilises the red hellish sky of Doom II ("SKY3") instead of the default one featuring brown clouds ("SKY1"), thanks to DMAPINFO. 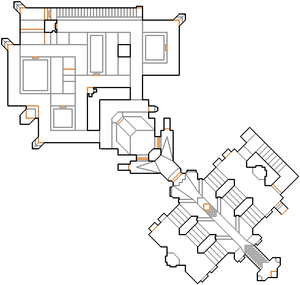 Map of Tomb of Malevolence
Letters in italics refer to marked spots on the map. Sector, thing, and linedef numbers in boldface are secrets which count toward the end-of-level tally.

Run through the initial area to the northwest. Open the large door with the skull on it and continue into a room with two more skull doors. Grab the megaarmor if you want to and enter through either skull door in front of you. There is a rocket launcher in this room along with a few crates of rockets, and a skull switch. Press the skull switch and you will be lowered into a large room with many pillars. Beware, there is a huge number of imps who will swarm you - it is recommended to use a BFG9000 or a rocket launcher to kill them. There is also a cyberdemon in this large room, so use caution. Various skull switches around the room will lower sections of wall and pillars containing more imps and various powerups, and also will give you more maneuverability to dodge the cyberdemon's rockets. Near the north edge of the map is a skull switch that raises a set of stairs - go up these stairs and kill the imps at the top, then run across the pillars to the south. To the left of the last pillar is a teleporter between two candles on the corner of a wall - this will warp you back to the beginning of the map, where the previously raised teleporter in the center of the first room now has stairs leading to it, allowing you to exit the level.

* The vertex count without the effect of node building is 656.