(Redirected from MAP08: Tricks and Traps)

MAP08: Tricks and Traps is the eighth map of Doom II. It was designed by Sandy Petersen and uses the music track "The Dave D. Taylor Blues". The par time is 2:00. The map introduces a new enemy, the pain elemental, who looks very similar to the cacodemon.

The level is notable for its unusual monster encounters and design. As the name suggests, there are many traps throughout the level, though there are also many tricks to minimize or avoid danger. Along with the player's stealthiness, monster infighting and teleportation have significant roles in the level. 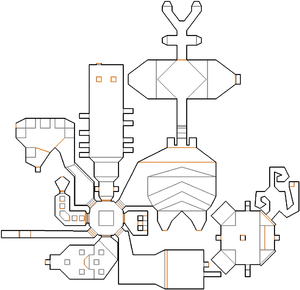 Map of Tricks and Traps
Letters in italics refer to marked spots on the map. Sector, thing, and linedef numbers in boldface are secrets which count toward the end-of-level tally.

You appear at an octagonal room with eight nearly identical doors. First, go through the southern one to find a room with many barons of Hell and a cyberdemon. Once the cyberdemon sees you, he will start firing, hitting the barons (who do not notice you until you decide to attack), who will fight back. While they are fighting, pick up the soul sphere in the room. If all the barons between you and the cyberdemon have been killed, move in front of another batch so the rockets hit them instead of you, and the fighting should continue until the cyberdemon is killed. Once the cyberdemon is dead or there are too few barons left to kill him, pick up the invulnerability sphere nearby and kill the remaining enemies. Once the coast is clear, drop down to where the cyberdemon originally was, pick up the yellow skull key, and flip the switch behind it in order to get back to the starting area. Be careful upon reentering the center room, as some barons may have accidentally teleported from the previous room.

Back in the center room, open the yellow door and follow the path along until you reach the red skull key. The floor behind you will have sunk into a pit of slime, keeping you from returning to the starting room. Arm yourself with your most powerful weapon, back into the alcove where the red skull key lies, and pick the item up. Once you do, walls start to lower, unleashing a slew of enemies. Clear a path to the northeast corner of the room and pick up the invulnerability sphere. Clear out the rest of the enemies and flip the switch in the northwest corner of the room to raise the bridge to the center room again.

At this point you can exit, although many areas in the level remain unexplored. They are completely optional. Check the two sections below for descriptions of them. Once you are ready to exit, open the red door in the center room. You may want to save here, as the next obstacle is easy to fail, resulting in inescapable death. In order to reach the exit door, you must run across the platforms floating in the slime. Once you step on one, however, it begins to sink, so speed is essential. Once you have successfully reached the other side, open the exit door, kill the demon and flip the switch.

The northern door reveals a wide hallway of which events may be dictated by the skill level. On Hurt me plenty or lower, the hallway seems empty initially. However, when you go along it or fire your weapon, you will wake cacodemons in their alcoves. There is a plasma gun and an energy pack at the other end of the hallway for you to respond to the monsters' attacks. In addition, there is a switch that opens a doorway in the hall behind the northeastern door (see secret #2).

On Ultra-Violence or higher, the hallway has a difference that is more remarkable than it may look: there is a lone sergeant at the end of the steps. Actually, he is a lure for the player. If you try to kill him, the cacodemons are alerted immediately, and they make it more difficult for you to reach the end of the hallway. If you do not have enough ammunition to beat the eight cacodemons and are unable to get the cell weaponry, you just need to flee to another room and face them later.

The northeastern door exposes a bright hall with a rocket launcher and boxes of rockets in one end. Opposite the ordnance, there are two ledges with a group of demons on both. When you are about to grab any of the items, stairs begin to form towards the ledges and, eventually, the demons are able to proceed towards you. The switch on the eastern ledge opens the door back to the center, while the switch on the other one opens a doorway near the position of the rocket launcher (secret #2).

The room behind the eastern door is small in comparison with its counterparts. The area includes teleporters that take you to a monitor hall isolated from the bulk of the level. Depending on the skill level, there are spectres right in front of the landing spots. On Hey not too rough or lower, the northern teleporter offers a "spectre-free" entrance to the hall. On higher levels, both available teleporters have a lurking spectre at the other end, but there is still a way to surprise them from behind (secret #4). The monitor hall has some ammunition. Take the teleporter to leave the area.

Instead of the center room, you are brought to the area behind the southeastern door. You cannot return to the center, so you must face the challenge behind the corner. There is a shotgun on a ledge. A lower level has a lot of imps standing away from you. Once alerted, they start moving towards you, but along the way, they cross a teleporter line and end up right on your other side. Unless you have weaponry to deal with them, a working tactic is to pump the existing shells to the teleported imps and then dodge their attacks until enough of them have left the lower level. It allows you to make it to the area's end, where there are two boxes of shells that are sufficient to quell the army of imps. Press the switch to open the door and use the teleporter the imps used to return up. On Ultra-Violence, there are some imps on the ledge as well.

The two devices mentioned below exist mostly for compatibility in multiplayer.

A noticeable Hall of mirrors effect can be seen right behind the door leading to the chainsaw corridor. It is the result of the upper texture on linedef 101 being applied to the wrong side.

The lower texture on a side of one of the rising stairs (linedef 232) in the rocket launcher hall has a possibly incorrect texture, BROWNHUG instead of STEP2. It is a fairly large visual oversight.

A similar texture mistake seems to be present on one of the walls just inside the yellow door (linedef 598), where a single wall is textured in STONE2 instead of GRAY5.

Linedefs 270 and 276 are flagged to be lower unpegged. It causes the textures to scroll upward when the computer panels above them rise unleashing the pain elementals. Given that the flags make absolutely no difference to the offset of the textures in the particular case, the flags were added very likely by mistake.

* The vertex count without the effect of node building is 524.