MAP08: UAC Nukage Areas, Waste Tunnels/Drainage Tunnels is the eighth map of Perdition's Gate. It was designed by Tom Mustaine. 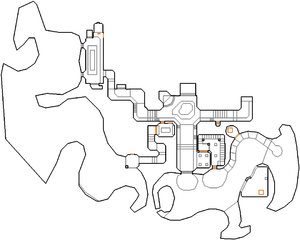 Map of UAC Nukage Areas, Waste Tunnels/Drainage Tunnels
Letters in italics refer to marked spots on the map. Sector, thing, and linedef numbers in boldface are secrets which count toward the end-of-level tally.

At the start, go forward while hugging the left wall and open the second door you find. Go down the stairs in front and open the door to the left. Go down the stairs to your left to collect the blue key, then return to the nukage area. As you exit through the first door you entered, cross the nukage flow to your right and continue right, hugging the left wall until you reach the blue door. Go through it, make a hairpin turn to the left and flip the switch. Exit this room and climb both sets of stairs to your left up. Follow the path to a room with a nukage flow: go to the right here and press the switch on the right wall to lower the lift, then step on it to exit the level.

* The vertex count without the effect of node building is 836.