MAP08: Woodhead is the eighth level of Eternal Doom and was designed by Dietmar Westerteicher. 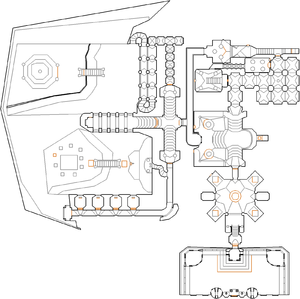 Map of Woodhead
Letters in italics refer to marked spots on the map. Sector numbers in boldface are secrets which count toward the end-of-level tally.

The cyberdemon taunts you throughout this level. At the first encounter, hit the switch to the left just inside the door to slam the door on him. At the second encounter, he will fight a spider mastermind for you. If you can't kill the cyberdemon at this point, if you time it right you can step up onto the block he is on. The block will lower and once he steps outside that square he will be transported away.

* The vertex count without the effect of node building is 2788.