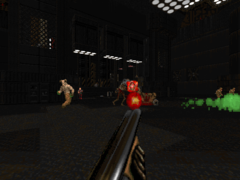 MAP08: Worst Case Scenario is the eighth map of UAC Ultra. It uses a music track "Drugged Perfection" by Nick Baker and Vincent Fong that originally appeared on MAP15 of Crucified Dreams. 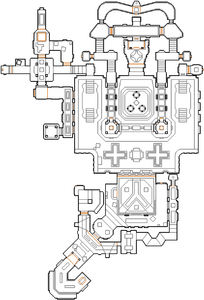 Map of Worst Case Scenario
Letters in italics refer to marked spots on the map. Sector, thing, and linedef numbers in boldface are secrets which count toward the end-of-level tally.

Head out of the elevator killing former humans as you get the chaingun. When you reach the next lift, it will go down and you will be at a fork. The door straight ahead and the door to your left both need the red key, so turn right for now. Open the door and follow this passageway until you go down another lift. Here, several chaingunners guard the red key. After grabbing it, the red door near the lift leads back to the fork, so head for the red door to the west now. Inside, a mancubus guards a switch. This switch opens up a path east of the fork, where several enemies will attack. This path leads to the big room of the map.

There are plenty of monsters along the way in this big room, including demons in trenches with a few pickups nearby. Head for the center of this big room and go north, where more enemies guard a large lift. Ride it up, and you have a choice of two paths. Both of these paths are symmetrical, so just take either one and climb down the steps. The nearby door in either path will have a switch to open the next door along either path. This door leads up to a lift which leads to a pressure plate. After stepping on it, take the other path, doing the same thing, but being careful as even though the layout here is symmetrical, the monster placement is not. After stepping on both plates, the northern passages on either side will be open. Take either one and you will find a super shotgun and a switch.

The paths will close when you try to backtrack, but the switch next to the large lift will open it up as well as the side paths. Head back down to the big room to face a spider mastermind behind the large door that had just opened. When he is dead, ride the lift up, and head around the ledge until you get to a switch. Press it and run back to the southwest to the open door. In here, turn right and take the north door to a room with demons and lost souls. Pressing the switch in this room reveals imps, but also opens the lift in the previous hall. Take the lift down to be confronted by several former humans in this hall, with revenants guarding the blue key at the end. A wall of imps opens up once you collect the key.

As you backtrack to the big room, some barons of Hell will be in the previous room. A cyberdemon (Hurt Me Plenty or higher, otherwise, a mancubus), and some mancubi (Hell knights on Hurt Me Plenty or lower) will be greeting you at the big room. Head for the blue door to the northeast in the big room and dispose of the cacodemon guarding the exit.

* The vertex count without the effect of node building is 2546.

On linedef 140, there is a texture on the wall with a message violently scribbled on it that reads, "Kill The Shepherd, Save the Sheep." This is a lyrical reference to the song "Magic Fingers" by the band Cursed, which is one of Jon Vail's many favorite bands, on the album Cursed III: Architects of Troubled Sleep.

Similarly, on linedefs 144, 149, and 175, there is a texture on the wall that is high up and most likely cannot be seen clearly without free look, that has a message violently scribbled on it that reads "Digital Dogs with Analog Collars." This is a song title from the band Trap Them, which is another of Jon Vail's favorite bands, on the album Sleepwell Deconstructor. The full title is "Day Seven: Digital Dogs With Analog Collars."