MAP08: Xenturion is the eighth map of the Newdoom Community Project. It was designed by Dennis Meuwissen (Exl). 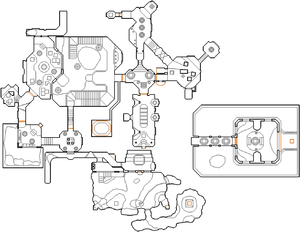 Map of Xenturion
Letters in italics refer to marked spots on the map. Sector numbers in boldface are secrets which count toward the end-of-level tally.

Get the megaarmor here, and you will have a choice of two paths going south. Take the left one into a storage area with the blue keycard available. Enter the door to the west of that and you will find two colored doors. Take the blue door south into a laboratory with zombiemen and a switch. The switch releases revenants, and in the alcove to your left lies the yellow keycard. Now go through the yellow door into a very large courtyard with some stairs leading up and down. You can get a number of items if you explore here. Take the stairs leading down into a hall with a lift. Up here is a room with a baron of Hell and two Hell knights. You can explore the areas to the west if you want to, getting a number of items including a rocket launcher. When ready though, head into the nukage-filled tunnel to the south. Go to the right first to nab an invulnerability to help you fight the monsters here. In the tunnel, there is a switch that can remove bars blocking access outside from ground level, although you can take the stairs up and exit to the outdoor area from there instead. Outside though, be prepared for a cyberdemon. The lone teleporter here leads you to a shrine. Go through it picking up a megaarmor, and if you flipped the switch in Secret #1, you will be able to access Secret #3. Otherwise take the teleporter back. A rocky pass to the south has opened, leading to the map exit.

This level contains two computer area maps; outside of certain source ports, you can only pick up one of this item per level. Thus, you cannot get 100% Items in this level.

* The vertex count without the effect of node building is 3025.