MAP08 is the eighth map of 2 Sectors. It was designed by Andrey Budko (entryway). 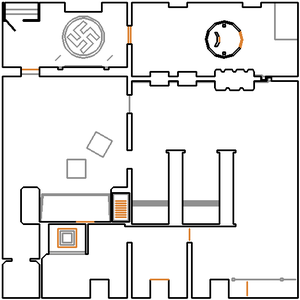 Map of MAP08
Letters in italics refer to marked spots on the map. Sector, thing, and linedef numbers in boldface are secrets which count toward the end-of-level tally.

Take the chainsaw and kill the two zombiemen in front of you, then turn right and kill two more zombiemen hiding behind some tech cubes. Step through the doorway here and head east past two alcoves containing zombies and imps until you reach the wall then turn right to see a fence with an armor and berserk pack behind it (taking the berserk causes a chaingunner to teleport in behind you, or a revenant on Hurt Me Plenty skill level or higher). Head west through a narrow wall opening then look left to see a lion switch guarded by a Hell knight; press the switch then head west into the next room where a wall has lowered to reveal a chaingun.

Take the chaingun and you will be teleported to the tops of the tech cubes; wait for them to rise then step south across the cubes to a ledge where one or two shotgun guys are guarding a switch. Flip the switch then head north through a tan door that has opened and turn right to confront a chaingunner and one or two Wolfenstein SS. Head east into the next room to kill some zombiemen and imps (plus a knight on Ultra-Violence and Nightmare skill levels) then head round to the east side of the round column in this room to find an arch-vile guarding the exit switch.

A super shotgun can be found in the swastika room on I'm Too Young To Die and Hey Not Too Rough skill levels. Enter the open cabinet in this room to find a backpack.

* The vertex count without the effect of node building is 458.