MAP08 is the eighth map of Dystopia 3. It was designed by Anthony "Adelusion" Czerwonka and Iikka "Fingers" Keränen and uses the music track "". 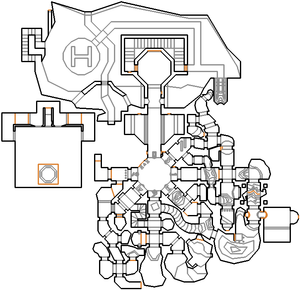 Map of MAP08
Letters in italics refer to marked spots on the map. Sector, thing, and linedef numbers in boldface are secrets which count toward the end-of-level tally.

Those who are familiar with Requiem will presume that this level, with a similar layout and concept to Keränen's MAP08: The Reactor, plays similarly. Arguably, this has become the biggest trap of this level. The Reactor is an opening-stretch level in a megawad; this is not. This map has six levels, some interconnected, and boasts significantly more dangerous and tricky layouts than The Reactor. Health is rather scarce in some parts, so be careful.

There are no health items (unless you use one of the secrets) until you get into the elevator of the first building, so conserve your health.

You begin in a cave with a railway track. Grab the shotgun, head out and kill the shotgun guy and collect the box of shells in front of him. Watch for potshots from former humans up on a raised platform in the west. At this point, you may wish to head west to slaughter a sizable number of former humans, as well as a mancubus (Hurt me plenty and above only), an arachnotron and a revenant (both Ultra-Violence and above only). Head up the stairs in the west to reach the ledge with the shotgun guys and collect a super shotgun and another box of shells.

Backtrack to the north side of this outdoor area, and go through the door. This narrow staircase has an impressive array of enemies - up to four Hell knights, three chaingunners and three shotgun guys. Make your way to the top, flip the switch and open the wooden panel west of the switch. On Hurt me plenty and above, there is a mancubus inside, with a shotgun guy (Hey, not too rough and below), chaingunner (Hurt me plenty) or both (Ultra-Violence and above) nearby. Kill them, then flip the switch on the west wall to lower this elevator to the ground.

The shaft elevator has three switches. The left one lowers the platform all the way to the lowest wing (Floor 6). The center one raises the platform to the next wing. The right one instantly raises the shaft elevator to Floor 0 (where you are now). Get on the elevator and flip the left switch. This is a nasty "descending elevator" setpiece. As you lower to each floor, monsters will attack you from the wing's entrance. In order:

If you have the rocket launcher from the previous map, your life is much easier - just use one rocket for any imps in the front and two more for any monsters in the back. Your first task is to raise the elevator back to Floor 5. Head into the tunnels being mindful that there can be chaingunners and cacodemons in there. At the first fork, go left and kill the imps and revenant (Hurt me plenty and above only). At the next fork, go left, then kill a shotgun guy followed by a cacodemon (chaingunner on Hey, not too rough and below). Flip the switch, and then backtrack to the lift.

Next, you need to raise the platform to the first wing, and head east. In this next area, be careful of the pitfalls scattered throughout this wing. Fall into one and you'll drop parts of Wing 5 that are still filled with enemies. Thus, run through the first and second wooden arches to jump across a pitfall, then stop between the third and fourth wooden supports. Kill the imp to the left (north), then see if you can shoot out the imps behind the bars in the south. Watch for a cacodemon or two from the east. Once the coast is clear, head east and follow the corridor around.

You will come to a lava area with some imps. Kill them and the cacodemon behind them (Hurt me plenty and above only), then head into the room with the two metal pipes. Open the western one to get a rocket launcher, then flip the switch in it. Part of the lava pit will have sunk, so jump across it again. A trap has opened to the north with up to four imps - no big deal if you expect them. Continue backtracking west to the spot where you was the imps behind bars in the south. Walk a little south and kill the chaingunner in the trap to the left. There is a another pitfall here, so run full tilt to the switch ahead, flip it, then run back to the junction.

Continue north back to the room with two pipes. Now, the west pipe is open. Stand inside the west pipe and flip the switch to lower the floor inside the pipe. When the floor stops moving, open the pipe wall to the east to enter a room with up to seven shotgun guys. Grab the berserk pack in the back, flip the switch, and use your new-found strength to punch out the demons that are released from the trap to the south. Open the pipe again (if needed), then press the switch to be immediately returned to the top of the pipe.

The wall to the south will have opened. Kill the chaingunner ahead. As you approach the platform in the southeast, watch for an ambush by a cacodemon (Hey, not too rough and below), Hell knight (Hurt me plenty), or a baron of Hell (Ultra-Violence and above) from an alcove in the north. Don't activate the platform until it is dead!

Next, ride the platform down to a cavern filled with imps. See if you can use the barrel in the middle to your advantage. Exit the cavern through the northwest.

At the fork, go north first and clear the room of zombiemen. You will come to a room with two switches. Flip the left one to lower the crate at the entrance of Floor 6, then flip the right one four times to lower the rock obstacle blocking the entrance to Floor 3.

Backtrack to the fork, and take the western staircase down, collecting a large number of health bonuses. At the end of the staircase, you will reach Floor 6. Watch for chaingunners and a revenant in the south. As you cross the slime, watch for a chaingunner ambush from the right (Ultra-Violence and above only). When you reach the fork ahead, you will be set upon by a revenant on one side, as well as a Hell knight (shotgun guy on Hey, not too rough and below) and a cacodemon from the other. Back off onto the shaft elevator and deal with them from there. Return to the fork, then head east.

In this tunnel, you will run into numerous former humans and a number of tough monsters: a mancubus, then a revenant, then an arachnotron (cacodemon, Hell knight, then chaingunner on Hey, not too rough and below). At the end of the cave lies a chamber with the red key and a soulsphere. As you grab it, be careful of a chaingunner placed in an ambush position in the south of the room.

Backtrack to the shaft elevator and deal with them. Later, you can go to their trap and grab a plasma gun.

Raise the shaft elevator to Floor 4. Head into the tunnel and press use on the wooden wall with the skull switch. This reveals a small alcove with a cacodemon (Hurt me plenty and above only). Step into the alcove, and the other wooden wall opens, releasing a chaingunner (Hey, not too rough or below), or a revenant (Hurt me plenty and above). Kill it and head into the tunnels where it came from.

Guns blazing, rush south. When the cave turns southeast, remember to check for a chaingunner in ambush to the left (east). At the intersection with the backpack, you will wake a mancubus and a Hell knight (two cacodemons on Hey, not too rough and below). Pull back and see if you can start some monster infighting. Once they are clear, head south at the intersection, and you will encounter a tunnel with an arch-vile (revenant on Hey, not too rough and lower). Stand your ground and take it out, then flip the switch behind it.

Backtrack to the shaft elevator, then raise it to Floor 2. The blocking bars have raised. Head through to find a teleporter, and brace yourself for a particularly devious finale.

When you step through the teleporter, you will be taken to an octagonal room with a green baron of Hell face on one panel, which seems inescapable. This finale is designed to kill you or put you in a very bad spot if you are unprepared for it. When you entered Floor 2, you crossed a linedef that closed the octagonal walls for 30 seconds, after which they will reopen. When they reopen, you will be on an isolated platform, facing off against an Icon of Sin, which has two hidden cyberdemons in support (two barons of Hell on Hey, not too rough and lower). If you mess up and fall off the platform when it opens, you will be forced to kill both of these boss monsters before you can dispose of Romero's head personally.

Thus, the correct solution for the finale is to equip the rocket launcher (a rocket launcher and a box of rockets are available here). Align yourself in the center of the octagonal room, facing the green panel (directly north). When the walls open, quickly fire three rockets and the Icon of Sin will be put out of commission, allowing you to exit the level.

On Floor 1, jump across the first gap in the floor, then very carefully drop off the eastern side of the gap. You will land on a tiny ledge with a megasphere.

In Floor 6, there is a room with a medikit and two pillars with stretched faces. This medikit is booby-trapped; attempting to collect it without defusing the trap will kill you. The two pillars are actually false walls, which each conceal a barrel positioned under a crushing ceiling. Approaching the medikit starts the crushers and causes the barrels to explode.

To defuse this trap, fire a rocket at either pillar. Both barrels will explode, and the crushers will have nothing to crush. You can now safely take the medikit.

* The vertex count without the effect of node building is 1740.