MAP09: 4chan Servers is the ninth map of Doom 2 Unleashed. It was designed by Walter Confalonieri (daimon) and uses the music track "Cold Subtleness" by Jonathan El-Bizri.

When using the music WAD included with this megawad, this level instead uses the music track "Killing Rage" by Paul Corfiatis. 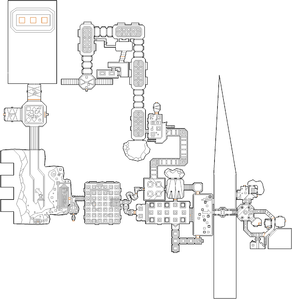 Map of 4chan Servers
Letters in italics refer to marked spots on the map. Sector, thing, and linedef numbers in boldface are secrets which count toward the end-of-level tally.

Take the shotgun in front of you then go round the corner and down the stairs to a large room with computer desks. Kill the monsters on guard then look at the east side of the desk nearest the entrance to find a hidden switch which will open the door down the stairs to the east. Pass through the door and go straight ahead at the junction, then follow the steps down past some zombiemen until you reach a small door. Open it and go round the corner to find a spectre on Hurt Me Plenty (HMP) skill level or higher, then open a second door to enter a square room with a super shotgun. Take the weapon and use it to kill the spectres hiding behind the columns, then head north into a tunnel and follow it until you reach a room with crates. Head north past some imps to a silver door, open it and kill three waiting chaingunners then flip the switch they were guarding to open a second door in the crate area.

Go through the door you just opened in the west wall to enter a wide passage, then turn right and start following the passage past a number of imps (plus four Hell knights on HMP or higher) until you reach a nukage pool with three chaingunners. Cross the nukage to a teleporter which will bring you to a room with a four-pointed arrow; as you step off the teleporter the floor will rise to block your way back. Turn left and head into a tunnel guarded by demons to get outside, then keep heading south past a truck until you reach a silver switch. Flipping the switch will open a concrete structure to the north-east containing one or two revenants - go inside it to find the red keycard by the east wall, next to a berserk pack.

Return to the room with the four-pointed arrow where a wall has lowered to the west, revealing five demons guarding a switch. Flip the switch to re-open the teleporter you used to enter the area and go back through it to the nukage pool, then backtrack to the very first door you opened in the level and go south at the junction, heading round the corner to find a door with red key markings. Go through it to a large hall with six columns that are hiding demons; kill them (plus a mancubus at the end of the hall on HMP or higher) then head through the doorway in the south wall and follow the blue passage to a lift with a backpack, which will bring you to a cargo area populated by imps and chaingunners. Flip the switch by the west wall behind some black and red stripes, which will open a door to the east indicated by a large arrow.

Go through the door and collect the rocket launcher and boxes of rockets behind it, then go up the steps to an octagonal room with five columns. Kill the waiting knight then go through the north doorway to find some crates and zombies, then go to the north wall to find a switch. Flip it and return to the octagonal room where two doors have opened to reveal a number of demons - go through either door and follow the passage until the floor starts to lower, then head east through a doorway that is revealed to find some chaingunners guarding another switch. Flip this switch then head west across the nukage, kill four shotgun guys then step into the blue teleporter to reach a chamber with three lost souls.

Step off the teleporter to lower the wall ahead and return to the octagonal room, then go through the north doorway and turn right to see that another switch has been revealed. Flip the switch then go into the north chamber to find that a pillar holding the yellow keycard has lowered. After getting the yellow key, backtrack to the start point and open the exit door here - the exit switch will be guarded by a chaingunner on I'm Too Young to Die (ITYTD) and Hey Not Too Rough (HNTR) skill levels, a revenant on HMP or an arch-vile on Ultra-Violence (UV) and Nightmare (NM).

While following the passage to the red key area, you will pass three small doors in the left-hand wall. To open the doors, return to the room with the four-pointed arrow after collecting the red key and press the switch to the west - approaching this switch opens an area to the north with a red 2, containing chaingunners plus a cacodemon on UV and NM. Entering this area will open the doors you passed earlier, revealing a number of monsters. More monsters will also teleport in near the red key door.

* The vertex count without the effect of node building is 4493.