MAP09: Abattoire is the ninth map of The Plutonia Experiment. It was designed by Milo Casali and uses the music track "Deep Into The Code" from Doom. Abattoir is a loanword of French origin that means slaughterhouse. The e at the end of the level name is a typo. An earlier version named Butcher was also released online. 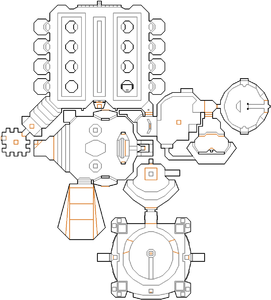 Map of Abattoire
Letters in italics refer to marked spots on the map. Sector, thing, and linedef numbers in boldface are secrets which count toward the end-of-level tally.

You begin in a large room with eight pillars. Grab the shotgun ahead of you. As you go around the hall, you will be attacked by four spectres and on Hurt me plenty (HMP) and above, a cacodemon in front of you. Kill them and proceed to the southeast of the room, where a super shotgun sits on a pad. As you step onto the pad, the surrounding floor will lower (it is a platform). Drop down into a small room with two demons. Kill them and enter the teleporter.

You are now in a new room with two crushers. Take the rocket launcher to your right. As you do so, the teleporter pad you entered this room on will rise up, preventing you from leaving. Collect the boxes of rockets on the steps, and kill the four demons (and two revenants on HMP and higher). Take the plasma gun and the four energy cells around it in the middle of the room. Once ready, proceed up the steps to the platform where the first pair of revenants were, and it is highly recommended that you do not fire any shot until the blue key has been acquired.

As you cross the top step, a revenant will appear in a newly-opened alcove behind you, in the northwest of the room. Flip the two switches on either side of the platform to access the blue key. This will also reveal two lost souls in nearby alcoves. Grab the blue key and flip the switch behind it to re-lower the teleporter so you can leave. At this point, your course of action will differ depending on whether you prioritise speed and survival, or would like maximum kills.

If you prioritise speed and survival, make a beeline for the teleporter, and do not fire a shot. When you are back in the small room from earlier, wait for the revenant and lost souls to teleport back here, then kill them. This potentially avoids triggering the teleport trap in the room.

If you desire maximum kills, trigger the teleport trap be firing a shot. The following amounts of monsters will teleport to the platforms in the crusher pillars:

The crushers may make your life slightly easier by crushing some enemies, but this is still a tough fight. Head to the alcove in the northwest of the room and grab the Invulnerability, provoke some monster infighting, and you can now proceed to kill all the monsters in any feasible manner. Once done, head back through the teleporter.

Once back in the small room, ride the platform back up to the starting room.

Back in the starting room, head through the door with a blue pillar in the southwest of the starting room. You will be on a platform overlooking a blood pit. Flip the switch to slowly raise a walkway in the blood. There is a mancubus on a platform opposite yours - use the structure the switch is on to shield you from the fireballs. On UV and above, your shots will awaken two cacodemons - in this case, they are your first priority. If you do not have enough space to handle them, quickly kite them out through the door you came in for some breathing room.

The south wall of the blood pit has a cage with some enemies. Before you proceed along the walkway, it is strongly advised that you stick around on the switch platform for a while and kill any enemy that makes its way into the cage. Once you start seeing chaingunners, spectres and, on UV and above, Hell knights appearing in the cage, you are doing it right. What this does is to drain the trap in the red key room of its enemies via a hidden passage, sparing you a potentially deadly encounter.

Head along the walkway and clear the chaingunner cage to your left. You may be able to grab a chaingun by bumping the cage bars. Continue forward, but as you pass a yellow-keyed doorway to the right, turn around and fire a shot. Near the switch structure, a trap has opened, and three chaingunners will attempt to shoot you in the back. On Ultra-Violence, a mancubus will appear too, but it is too large to get past the switch structure - head back and use the super shotgun on it. Once done, head to the thin door ahead.

This next outdoor circular room has nine imps and one (HMP) or two (UV and above) mancubi. Try to provoke some monster infighting - the wide spread of the mancubi fireballs is going to kill most of the imps, or get them to attack the offending mancubus. Head to the back of the room and run on this thin ledge to grab the yellow key.

Exit the room and head to the yellow-keyed doorway. There are four imps, two spectres and on HMP and above, an arachnotron. Let the arachnotron take out the imps and spectres for you, then kill it off. Grab the red key in the alcove ahead. This will trigger a trap to open, but if you waited to snipe the enemies in the cage in the blood pit earlier, you will face minimal opposition. If not, you will face six chaingunners, two spectres and, on UV and above, two Hell knights in this tiny room. Circle around the trap to make sure all monsters are dead.

Backtrack to the starting room. A pillar will have opened with an arch-vile in it - kill it quickly. Eight alcoves in the edges of the room will release a total of eight (HMP or below) or 16 (UV and above) imps into the starting room. Kill them and collect the stimpacks and boxes of shotgun shells in their alcoves if needed.

At this point, if you need health or ammo, you should backtrack and grab it from wherever available. Once you enter the blocked teleporter, there is no return. Once ready, head to the blocked teleporter in the south of the starting room. Raise the bars, collect the energy cell packs and head through.

You are now in a semi-circular room with a lot of enemies on a ledge (on Ultra-Violence, six imps, two barons of Hell and two Hell knights as well as two cacodemons in a niche). Turn around and head for the skull panel; open it for a soul sphere. As you do so, the enemies on the ledge lower to the floor. Use your plasma gun and rocket launcher to kill everything in this room, and then head to the door in the south (it automatically opens as you approach it), but do not enter the next room yet.

This next room is highly dangerous if you do not take it carefully. If you fall off the walkway, there is no way to get back up and death is guaranteed. The following details a safe way to handle this room.

Enter the exit teleporter to complete the level.

Thing 304 (a short green firestick) is in void space because the "pillar" it is in does not have a niche for a firestick like most of the other pillars in the starting room.

It is possible to avoid triggering the traps in the crusher room by stepping up to the platform in the east of the room through the diagonal sides of the trapezoidal top step.