MAP09: Baleful Confines is the ninth map of the Newdoom Community Project. It was designed by Nuxius, and uses the music track "chris3.mid" by Christopher Jon Wilkins. 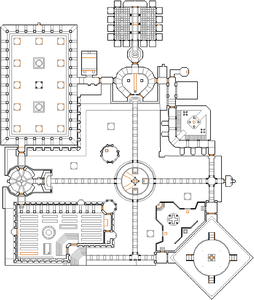 Map of Baleful Confines
Letters in italics refer to marked spots on the map. Sector, thing, and linedef numbers in boldface are secrets which count toward the end-of-level tally.

This map is generally non-linear, so you can get the keys in any order. The outdoor areas are generally empty, but there are platforms with mancubi and a few walls with imps. The exit is in the center, which is reached by pressing three switches around it. However, these switches are also barred with colored key bars which need to be opened separately.

To get the red key, go all the way to the northwest. If you are coming there from the east, there is an aside with a berserk pack and an invulnerability. Be prepared though, as a roomful of revenants will attack as you attempt to get the BFG9000. In the northwestern section is a large arena with imps, mancubi, and two cyberdemons. To get the key, press the switch in the northwest corner of the room. Now run on each lowering platform that each mancubus is on to lower the next one in front on it, going in a clockwise manner. Be careful as arachnotrons and revenants attack you as you do. When you step on the north central platform, a teleporter north of you will open, giving you the red skull key.

The southwest corner of the map is a large library with a large number of monsters. There are also three secrets and a red door. If you have the red key, open the door and kill two Hell knights before pressing the switch. This removes the bars around the southern switch near the exit. The door south of the red door has an arachnotron and another switch, lowering a teleporter in the southeast section of the map.

If you are going for the yellow key next, take this teleporter and go around the wall to find it just southwest of the super shotgun. The teleporter takes you into a cage where you can pick up the yellow key. Be wary of arachnotrons, and in order to get out you need to solve a puzzle. Hit the correct switch that is different from the rest or you will trigger a crusher. The solution is west (satyr), south (gargoyle), and north (lion). Go back to the room with the super shotgun and open the yellow bars for the switch that lowers bars around the switch on the eastern side near the exit.

You can get the blue key by going to the northern part of the map. Go up and around using the staircase, going into the door to the north, around the barricaded switch into the next room. Grabbing the rocket launcher here lowers some of the faceted walls and reveals various monsters. One of the northwestern rooms has a switch to lower the northern faceted marble face for another switch. Going into this cage opens up other ones behind you and releases an arch-vile. The switch here lowers bars for the switch that you past up because it was barricaded. To leave this room in order to press that switch though, you need to remove the bars by heading into one of the eastern side rooms and pressing the switch there. Now go and press the previously barred switch to raise a bridge to the blue key. If you fall in the nukage, use the bridge as a lift.

An area to the east has blue key doors. If you have the key, enter it and take the stairs down and the elevator up to a teleporter. You will end up in a small tower with two barons of Hell (if you have not killed them yet) and a switch, which lowers the bars around the northern switch near the exit. Be prepared for mancubi when you get back through the teleporter.

There are two possible softlocks in the map. First, in the library in the southwest corner of the map, it's possible to get behind the circular desk surrounding the octagonal bookcase by running off the tops of the bookcases. No legal way out. You have to idclip to continue. The second involves the collection order of the keys. You can get them in any order. They open bars blocking three switches which open the exit path. The red key opens the doors to the exit, the yellow key raises the bridges to the exit (they are also escape lifts), and the blue key opens the barriers to the bridges. If you get and use the blue key to open the barriers before using the yellow key to raise the bridges, you can end up on the ground below the exit with no way to continue.

* The vertex count without the effect of node building is 6820.