MAP09: Battleground is the ninth and final map of Disrepair. It was designed by Andrea Rovenski (Cyberdemon531) and uses the music track "untitled" by nub_hat. The par time defined in MAPINFO is 40 seconds. 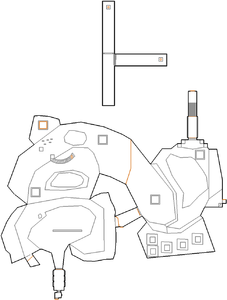 From the start, kill the Daedalus to lower the wall to the rest of the map, and collect the Doomsphere. Kill as many enemies as you can, as you head up the steps, over the top area, and down into the second bowl. Press the switch in the Eastern marble recess to open a corridor with a Hell knight and other monsters. Press the switch in here to lower the marble door with the demon face, and press the switch in there to gain access to the opening area again. The plinth on the upper area, which leads to the exit, will now be lowered, allowing you to teleport to the ending area.

As you run across the doorway in the marble corridor on the east of the map, the pillar with the invulnerability lowers. Collecting this also lowers the platform with the Doomsphere on the upper level, at the end of the map.

Two enemies don't spawn into the map, thus you can only reach 98% kills.

* The vertex count without the effect of node building is 653.

As you collect the second Doomsphere, a large banner raises up, depicting fellow speedrunner CruelFancyBaron, and his unfortunate hairline.