MAP09: Bitter Sanctuary is the ninth map of Claustrophobia 1024. It was designed by Steve Muller (Kyka), and uses a MIDI rendition of the music track "Lair of the Blind Ones" from Turok 2, sequenced by Churute. 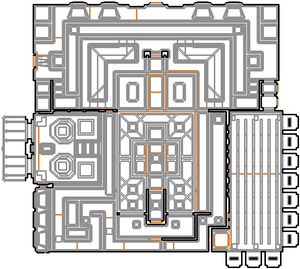 Map of Bitter Sanctuary, cropped to only show the playable area
Letters in italics refer to marked spots on the map. Sector numbers in boldface are secrets which count toward the end-of-level tally.

The level is pretty straightforward: going in any unexplored area opens a monster closet, either behind you or on both of your flanks. Moving into the opened monster closets opens more monster closets (or sometimes just teleport traps), until the entire area is open. 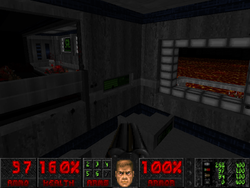 A lowered secret area and the "striped light" that opens it.

* The vertex count without the effect of node building is 5906.