MAP09: Cargo Bay is the ninth map of STRAIN. It was designed by Anthony Czerwonka (Adelusion) and uses the music track " ". 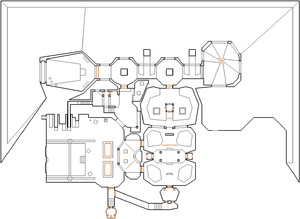 Map of Cargo Bay
Letters in italics refer to marked spots on the map. Sector numbers in boldface are secrets which count toward the end-of-level tally.

A berserk pack (Thing 43) is in a section south of the starting point that is only accessible in deathmatch, and 100% items is not possible because of this item.