MAP09: Castle Gardens is the ninth map of the megawad Alien Vendetta. It was designed by Kim "Mutator" Malde in 1996 with DEU 2 and DETH v4.16B. It was the author's first map for Doom II, and was one of the few maps to remain unchanged from the first release to the second. The par time defined in the executable is 4:00. 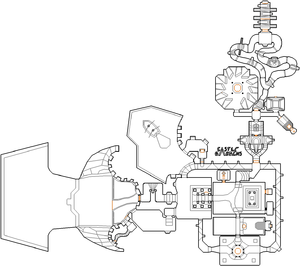 Map of Castle Gardens
Letters in italics refer to marked spots on the map. Sector, thing, and linedef numbers in boldface are secrets which count toward the end-of-level tally.

At the start, go forward through the door. Follow the hallway. In the first room you come to, make a right, then make another right into the passageway with the stairs. Follow the stairs to the top of the castle. Pick up the red key and jump back into the room you started in. Go back through the hallway into the room you made 2 rights in. This time, make a left. Follow the hall, which curves to the right, and when you reach the first intersection, open the door (to the left). Go either direction after the door and follow straight until you reach the next room with two ways to go. Go to the left, then turn to the right to enter the room with the bookcases. Pick up the blue key and proceed back to where the 2-choice room was, but continue to the passage on the other side. Press the switch in this room and then reenter the center of the 2-choice room. Turn right and go down the newly opened lift. Proceed through the slime tunnels and you will find the blue door at the end. When you walk into it, the level will end automatically.

* The vertex count without the effect of node building is 2908.