MAP09: Cezanne is the ninth map of 32 in 24, a deathmatch megawad. It was designed by Brett Harrell (Mechadon) and uses the music track " ".

It was the twelfth submission to the project, arriving at five and three-quarter hours into the session, just one minute after MAP08. It took Harrell four hours to build, plus 15 minutes for testing; one of the longest development times of any map in the final WAD. 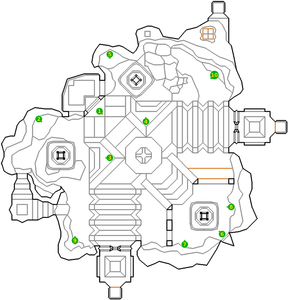 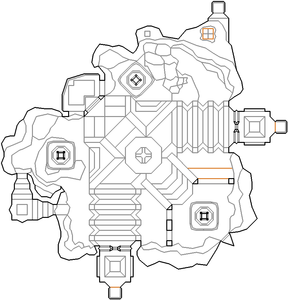 Cezanne is a moderately sized and well-detailed level set in and around a small outpost made of brick and metal, surrounded by grassy hills. The building is quite open architecturally, with a lack of walls reaching to the ceiling, meaning that combat can take place between players inside and outside the building at any one time. At the very centre of the building, and the map itself is a chaingun with four boxes of bullets. Stairs leading north-west and south-east from the centre lead down to the grassy area. To the south and east of the centre is a path running through the building, but there are several gaps in the floor to avoid obstructing the path around the grassy area below, each containing either a box of shells or a super shotgun. Players must move quickly across these upper sections to avoid falling down to the lower level.

At the end of each is a small room, the southern one contains a green armor, and the east one contains a berserk pack. Both have a teleporter built into their back wall. The southern one leads to a small alcove in the south-east of the map, obscured by a fake wall (the marble demon face). The alcove contains a partial invisibility, a very powerful item in deathmatch games. The eastern teleporter leads to a highly-elevated hilltop in the north, giving an impressive view of the map. At first there appears to be no item in this area, but staying on the upper level and moving west will lead the player across a narrow ledge to the megasphere. This area is also required to obtain the BFG9000, see next paragraph.

The lower path is obstructed in the south-east if travelling clockwise around the map, as a sharp difference in elevation requires players to take a lift to continue. To compensate, the lift moves very quickly, and with a short waiting time. If travelling counter-clockwise, a smaller obstacle is presented in the north of the map, where players must navigate up oddly-shaped grass steps. A rocket launcher can be found next to these. Continuing counter-clockwise from here leads into a small annex to the building, containing a green armor, and a BFG9000 with some ammo for it. The BFG is out of reach, placed on top of a platform, and can only be retrieved by going to the eastern teleporter previously mentioned. Standing on the marble face in the hilltop destination will temporarily lower the BFG's platform, and the player must run to it from the hilltop, which takes a few seconds. Continuing counter-clockwise again, players have the option of running into a small underground structure in the south-west of the map, which contains the plasma gun and another energy cell pack.

Ammo is plentiful in this map, such that players should rarely run out when using the main weapons. Armour is also in good supply, with many armor bonuses to support the green armors and the megasphere. Health is slightly more scarce, although this makes the megasphere more valuable.

This map contains ten spawn points, all of which are placed on top of a shotgun: