The level is a spiritual sequel to Iron Exuviae, a level designed by Steffen for NOVA: The Birth. Originally, Steffen had intended to submit Saturnine Chapel to the Doomworld Mega Project, but decided to release it standalone due to the extreme nature of its gameplay. 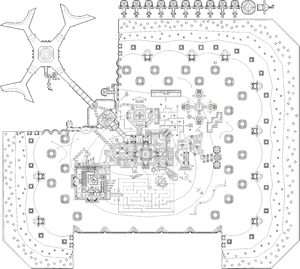 Map of Copper Exuviae
Letters in italics refer to marked spots on the map. Sector numbers in boldface are secrets which count toward the end-of-level tally.

* The vertex count without the effect of node building is 21658.